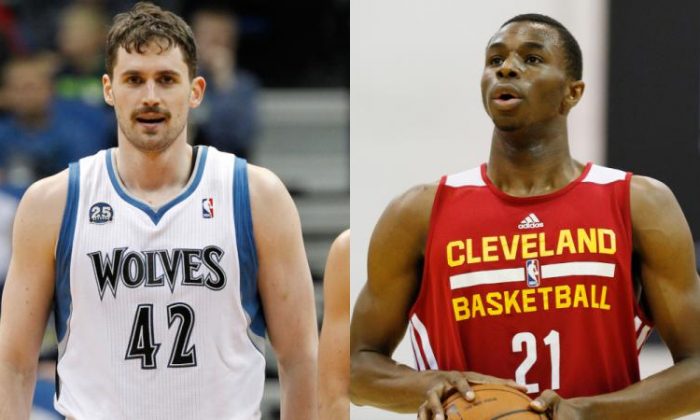 Bill Self Reveals Andrew Wiggins Wants To Be Traded To Minnesota

OVERLAND PARK, Kan. — Andrew Wiggins told Kansas coach Bill Self that he wants to be traded from Cleveland to Minnesota because the No. 1 overall pick believes it will be better for his long-term future.

Wiggins joined his former coach as a guest instructor at Self’s basketball camp in suburban Kansas City on Sunday. And while Wiggins declined to speak to the few reporters at Shawnee Mission West High School, Self said the rookie wants to carve out his own legacy in the NBA.

“When all this trade stuff started, I talked to Andrew and Andrew told me, “I hope I get traded,” Self said. “And I’m like, ‘No you don’t.’ And he said, “Coach, I do. It’s better for me, knowing my personality and what I need to do, to go somewhere where I’m forced to be something as opposed to going in there where they’re going to be patient with me and I’m going to be a piece.”

Earlier this week, The Associated Press and several other outlets reported a deal has been reached to send Wiggins, Anthony Bennett and a first-round pick to Minnesota for All-Star forward Kevin Love, who will join LeBron James and Kyrie Irving to form a new “Big 3” in Cleveland.

The deal cannot be consummated until Aug. 23, when Wiggins is eligible to be traded.

Self said that he initially thought everything worked out perfectly for Wiggins, who would have a chance to win immediately in Cleveland. But he also saw Wiggins’ point: The low-key, soft-spoken swingman could fare better if he’s carrying the weight of a franchise.

That would never have happened if Wiggins was playing in James’s lengthy shadow.

“Even though in a weird way everybody would love the opportunity to play with LeBron because you’re guaranteed winning,” Self said, “for the longevity of his career, he needs to develop that mindset to be the guy, for him to be great, and I think being Minnesota will help him do that.”

Wiggins, who set numerous freshman records during his lone season with the Jayhawks, also appears to be a good fit for the Timberwolves. While his defense is already NBA-caliber, Wiggins will be able to develop his offense alongside point guard Ricky Rubio in an up-tempo system.

Speaking of that offense, Wiggins took part in a modified game of horse on Saturday against former Kansas stars Jeff Graves, Jeff Hawkins and several young campers. After clanking a series of 3-pointers off the iron, Wiggins was the first contestant to be eliminated.

He took the ouster with a smile and a shrug, just as he has all of the trade talk.

“I think he’s handled everything great. He’s excited,” Self said. “I think the whole thing that’s been blown out of proportion a bit is that he’s been in limbo. He’s known since the summer that he’d be traded. It’s OK. In some ways he’s looking forward to going to Minnesota.”