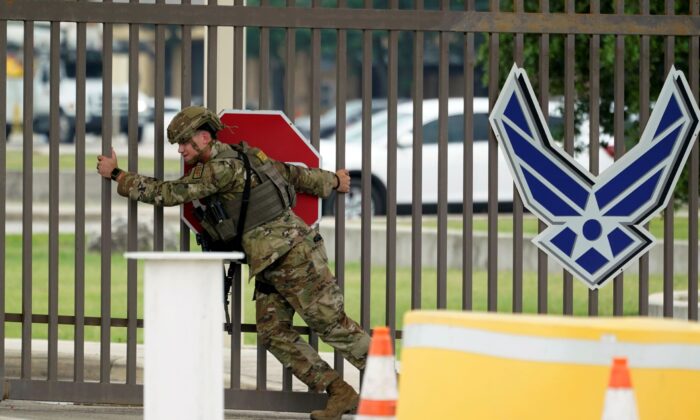 Called the Military Perimeter Transparency Act (pdf), the bill would direct the secretary of defense to produce regular reports on land purchases or occupancy around U.S. military facilities by foreign adversaries.

The reports, which would be submitted to the Committees on Armed Services of the Senate and House of Representatives, would also include recommendations regarding the “appropriate response” to foreign adversary ownership or occupancy in the vicinity of U.S. military installations.

“It’s critically important for the Department of Defense to identify when foreign adversaries like China or Russia acquire land near American military bases,” Green said in a statement. “America’s adversaries, especially those with a history of cyberattacks, espionage, and disinformation warfare, should never be allowed within reach of a U.S. military installation. Doing so would be a risk to our security and a major strategic mistake.”

“The term ‘foreign adversary’ means any foreign government or foreign nongovernment person engaged in a long-term pattern or serious instances of conduct significantly adverse to the national security of the United States or security and safety of United States persons,” states the bill, which was passed in February 2020 to safeguard U.S. communications systems from threats posed by foreign suppliers, such as Huawei and ZTE.

The announcement of the Military Perimeter Transparency Act comes amid security concerns about a proposed Chinese wind farm in Texas near the Laughlin Air Force Base, the U.S. Air Force’s largest pilot training facility.

China-watcher and hedge fund manager Kyle Bass, in April testimony before the Senate Committee on Business and Commerce of the Texas Senate, warned that the wind farm, owned by a former Chinese military officer, could be used to spy on U.S. troops.

“Proximity of these wind farms to our largest USAF pilot training base [30 miles from Laughlin Air Force Base and only 10 miles from its restricted airspace], creates a myriad of potential illegal surveillance opportunities for the former Chinese military officer Sun Guangxin,” Bass said in the testimony.

“What China is so good at doing in the United States is exploiting every kind of crack and crevice that we have in our open society and our democracy and our rule of law,” Bass told the “American Thought Leaders” program in a recent interview.