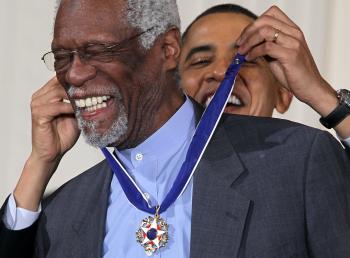 Bill Russell (L) is presented with the 2010 Medal of Freedom by U.S. President Barack Obama during an East Room event at the White House on Feb. 15 in Washington, D.C. (Alex Wong/Getty Images)
US

Alex Johnston
View profile
Follow
biggersmaller
Print
Bill Russell, the 11-time NBA champion and Hall of Famer with the Boston Celtics, and Stan Musial, a Hall of Fame baseball player with the St. Louis Cardinals, were both honored with the Medal of Freedom by President Barack Obama on Tuesday.

Russell, who has won the most championships of any North American athlete, is no stranger to receiving awards and trophies: Russell received the NBA’s Most Valuable Player Award five times, led the NBA four times in rebounding, and is a 12-time All-Star.

“This year’s Medal of Freedom recipients reveal the best of who we are and who we aspire to be,” Obama said. Of Russell, he said that “more than any athlete of his era, Bill Russell came to define the word ‘winner.’”

Celtics center Kevin Garnett said that Russell is a “transcending” athlete, according to ESPN.

“I think if you take someone out of history a lot of us are not even here,” he added. “Not only did he transcend on the court, but off the court, being pro-righteous in what he believed in and speaking up and standing up for that right.”

Musial, “matched his hustle with humility,” Obama said, adding that “he asked for a pay cut when he didn’t perform up to his own expectations. You can imagine that happening today.”