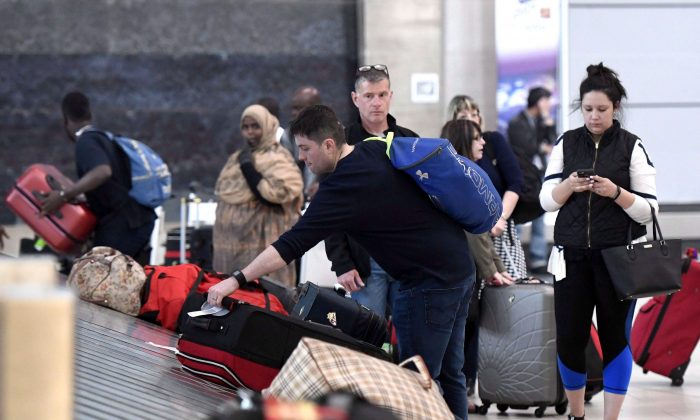 Travellers pick up their luggage at the Ottawa Airport on May 16, 2017. The federal government is introducing legislation for a passenger bill of rights that will set guidelines for how airline passengers are treated. (The Canadian Press/Justin Tang)
Canada

TORONTO—A bill of rights for Canadian travellers would prevent problems like those experienced by Air Transat passengers forced to withstand uncomfortably warm conditions on a flight stuck on an Ottawa runway for six hours this week, the parliamentary secretary to Canada’s Minister of Transport says.

Karen McCrimmon said the legislation—Bill C-49—could become a reality in 2018, and would give consumers a legitimate way to hold airlines accountable in cases of mistreatment.

“We’re giving the consumer more teeth, to be able to say, ‘no these are my rights, and I don’t have to accept being treated this way,”‘ she said in an interview. “It makes it in the airline’s best interest for this not to happen.”

The importance of the bill was highlighted after an Air Transat flight from Brussels that was meant to land in Montreal diverted to Ottawa on July 31 due to bad weather. A passenger said the plane was grounded for six hours and the cabin grew very hot, with some people having trouble breathing. At one point, a passenger called 911, after which bottles of water were handed out.

It’s hard to have a conversation in any place you go … without having people tell you about their travails with air travel these days.
— Ken Whitehurst, Consumers Council of Canada

Air Transat apologized to passengers and said airport staff were unable to provide loading bridges or stairs that would have allowed passengers to disembark or ground crews to replenish the aircraft’s drinking water supply.

McCrimmon said the upcoming bill of rights would lay out the basic standards airlines must adhere to, as well as the compensation passengers are entitled to if airlines don’t abide by the rules.

Currently, McCrimmon says Air Transat isn’t obliged to compensate the passengers on the flight diverted to Ottawa. But that would change once the bill passes.

“Right now there are no consequences for what happened on the ramp,” she said. “The passengers, all they can do is complain about their situation. But there’s no requirement for the airline to actually reimburse or credit them for what happened to them on the flight.”

The bill will guarantee a passenger’s access to basic necessities like water, climate-controlled cabins, and access to washrooms, McCrimmon said. It will also set guidelines for how passengers have to be accommodated if they are bumped off an over booked flight.

Travellers will also be protected from involuntary removal from an aircraft, such as the case of a doctor who was violently dragged off a United Airlines flight from Chicago in April in an incident that left him with cuts and a bloodied face.

One consumer protection group said such passenger rights legislation has been a long time coming, since most people now buy tickets directly from an airline—rather than an agent—and may not know everything about an airline’s policies.

“What used to be a fairly consistent environment, is now fairly fragmented,” said Ken Whitehurst of the Consumers Council of Canada. “Many aspects of travel and travel contracts were handled originally through travel agents … so there’s kind of a disconnect over the public understanding of who’s responsible for what.”

The sooner the bill is passed and consumers are educated on it, the better, Whitehurst said.

“It’s hard to have a conversation in any place you go … without having people tell you about their travails with air travel these days.”

Bill C-49 will also include changes to allow a larger percentage of foreign ownership of Canadian airlines, modernize rail transport with voice and video recorders, and will include other changes to long-term investment in the freight rail sector.