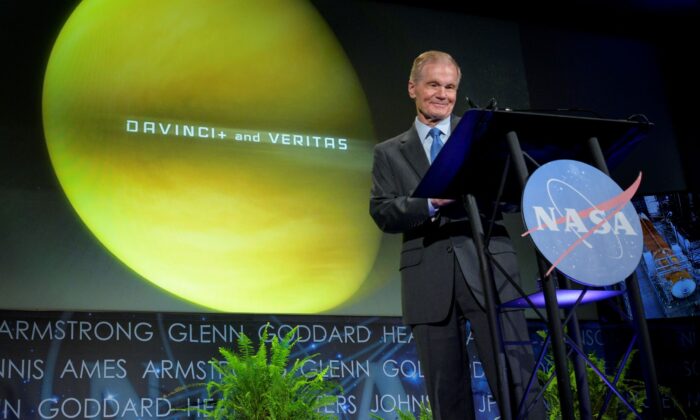 NASA Administrator Bill Nelson talks to the agency's workforce at NASA headquarters in the Mary W. Jackson Building in Washington on June 2, 2021. (Bill Ingalls/NASA via Getty Images)
Thinking About China

Bill Nelson, Lori Garver, and How We May Lose the Moon to China

Former Senator Bill Nelson, the current administrator of the National Aeronautics and Space Administration (NASA), told the German newspaper Bild on July 2, “There is a new race to space, this time with China.”

Whether America and the free world will win that race has much to do with Nelson’s budgetary and political battles with former NASA Deputy Administrator Lori Garver over the last decade.

Garver’s side of the story is relayed in her recent memoir, “Escaping Gravity, My Quest to Transform NASA and Launch a New Space Age,” one of this summer’s space policy literary events.

Garver, who served in several planning positions at NASA during the Clinton administration, became the chief space policy adviser for former President Barack Obama, led his NASA transition team, and served as NASA deputy administrator from 2009 to 2013.

If you are a liberal feminist Democrat space geek (and there are many), Garver’s memoir is a satisfying rollercoaster of battles and resentments against NASA’s male-dominated culture, former President George W. Bush’s Constellation moon program, and then-Senator Bill Nelson.

But regarding China—one of the most contentious issues during her time at NASA—Garver falls into a black hole.

Recall that in 2009, Obama made an early push to convince China to engage in a “partnership.” In mid-2009, White House science adviser John Holdren spoke of using China’s manned space capsule to take U.S. astronauts to the International Space Station (ISS) in the wake of the impending retirement of the space shuttle.

During Obama’s November 2009 visit to Beijing, the Chinese communist regime rejected his appeals for a broad partnership but agreed to his ambition to begin manned space cooperation, as declared in a joint statement:

“The United States and China look forward to expanding discussions on space science cooperation and starting a dialogue on human space flight and space exploration. … Both sides welcome reciprocal visits of the NASA Administrator and the appropriate Chinese counterpart in 2010.”

Of course, China would agree. At the 2009 Moscow Airshow, Russian sources told this analyst that Russia did not “sell” its space station technology to China at the time. The main explanation for the close similarity between early Chinese space station concepts and the Russian MIR space station was that Chinese engineers invited to Russian space companies as “interns” in the late 1990s had stolen that technology.

One could only imagine the sheer joy of Chinese space and military leaders at the prospect of hijacking gigabytes of ISS technology.

Garver, however, offers no larger insight into Obama’s space strategy for China.

Did Obama truly believe that beginning manned space cooperation with China would temper the imperial ambitions of the Chinese Communist Party (CCP)? Did he believe that doing so would diminish the strong China-threat motivation that helped drive the 2004 NASA Constellation program to return Americans to the moon by 2020, making it easier to cancel?

Meant as an attack, Garver’s memoir states, “Senator Nelson criticized the President [Obama] for slashing the Moon program and said the move could cause the United States to fall behind other countries in space exploration—most notably Russia and China.”

But Garver says nothing about the nemesis of Obama’s and NASA’s pro-China hopes, Virginia Republican Congressman Frank Wolf, who chaired the House Appropriations Subcommittee responsible for funding NASA.

Wolf, a staunch critic of the CCP, opposed Obama’s intention to initiate manned space cooperation with China. To the enduring ire of space policy liberals, Wolf essentially made it illegal in his 2011 “Wolf Amendment” that forbade using NASA funds to cooperate with China.

Perhaps it’s a measure of her resentment that Garver’s memoir doesn’t once mention Wolf.

But the measure of Obama-era enthusiasm for cooperating with China in space is indicated by the advocacy of Obama’s NASA administrator and former astronaut, Charles Bolden, who granted an “exclusive interview” to CCP propaganda department-controlled China Daily, published on Jan. 14, 2019, calling for the lifting of the Wolf Amendment.

But back to Nelson’s Bild interview in which he sounded an alarm about China’s intentions on the moon: “We must be very concerned about China landing on the moon and saying that it now belongs to the People’s Republic [of China] and everyone else should stay out.”

This will be a “giant leap” for the CCP. As it rejected an Obama-defined “partnership” in 2009 but tried to rope Obama into a China-defined partnership in 2012–2013, the CCP will likely only accept U.S. subordination to a Chinese-controlled dominion of the moon.

Bao also said the Chinese zone would require a transportation system. And in November 2020, China Daily reported that the China Aerospace Science and Technology Corporation (CASC) concluded that China would need 60 of its 50-ton-to-the-moon Long March-9 space launch vehicles from 2030 to 2035, or 10 a year.

Consider this a warning of the CCP’s intention. CASC may also have a more efficient reusable first-stage version of the Long March-9 after 2035.

But before 2030, Chinese astronauts may reach the moon on the less complex 25-ton-to-the-moon Long March-5DY SLV. Two of these are required for a manned moon mission and can also deliver supplies to early manned outposts.

In comparison, a June 20 Ars Technica article by Brian Berger cites leaked NASA documents showing China only plans to build 11 of its $1 billion space launch system (SLS) 50-ton-to-the-moon heavy lift SLVs by 2034, and to send the first manned Lunar Habitat to the moon in 2034.

By these measures, NASA and its Artemis program are strolling to the moon while China may be preparing to “blitz” the moon, with the likely intention of occupying choice locations in its southern regions that would have the best prospects for lunar ice water, key resources, and strategic advantage before the United States and its 20 Artemis Accord partners.

Had Obama not embraced illusions about China, making peace with China in space, and instead embraced and improved upon Constellation, NASA and the free world would be in a better position to avoid the CCP’s hegemony on the moon to complement its goals for hegemony on Earth.

The United States might have been building a presence on the moon about a decade before China. Then NASA’s very expensive, contractor-built Constellation rockets could have been succeeded by far more capable and much less costly huge private space launchers made possible by Garver’s space private sector reforms.

Now NASA is not just in a race with China, but is also in a budgetary and political race with itself. Can it accelerate the use of Musk’s SpaceX Starship—which is more efficient (cheap) because it is reusable and potentially can lift 100 tons to the Moon—to succeed the SLS as the primary NASA transport to the moon?

But Nelson must make a far more powerful case to the American people and President Joe Biden that NASA’s moon program deserves much better funding—funding that must be sustained even if Russia expands its war in Europe or the CCP decides to plunge Asia into war by invading democratic Taiwan.

Sounding the alarm about the CCP’s space intentions is a good start.