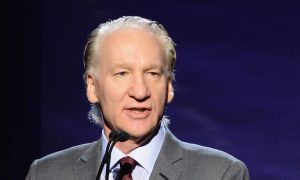 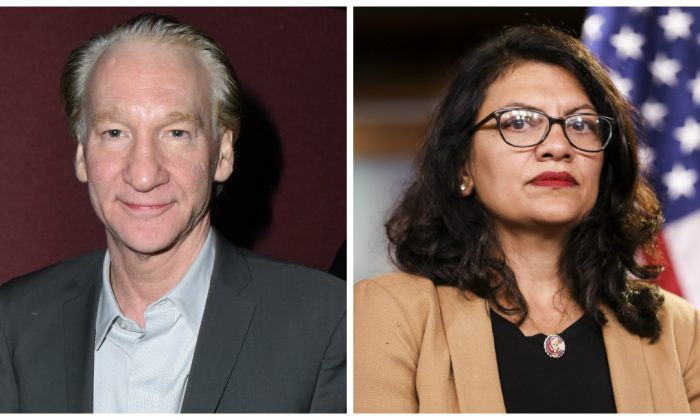 HBO host Bill Maher fired back at Rep. Rashida Tlaib (D-Mich.) after she called for a boycott of his show.

“Some people have one move only: boycott. Cancel. Make-go-away,” Maher wrote on Twitter Aug. 21.

“But here’s the thing, the house voted 318 to 17 to condemn the BDS movement, including 93 percent of Dems. Does Tlaib want to boycott 93 percent of her own party?”

The clash between Maher, known for his incendiary attacks against Republicans and conservatives, and Tlaib came after Israel barred her and Rep. Ilhan Omar (D-Minn.) from traveling to the country over their support for the Boycott, Divestment, Sanctions movement, known as BDS. Officials also noted the group sponsoring the trip has openly supported terrorism.

Some people have one move only: boycott. Cancel. Make-go-away. But here’s the thing, the house voted 318 to 17 to condemn the #BDS movement, including 93% of Dems. Does Tlaib want to boycott 93% of her own party? pic.twitter.com/0QrPQmwwiw

Tlaib was later granted access to the West Bank to visit her grandmother and other relatives but declined to go.

The House of Representatives passed a bill last month condemning BDS. Only 17 lawmakers voted against it. Two were Omar and Tlaib. The latter spoke on the House floor against the legislation, saying she “can’t stand by and watch this attack on our freedom of speech and the right to boycott the racist policies of the government in the state of Israel.”

“Our right to free speech is being threatened with this resolution. It sets a dangerous precedent because it attempts to delegitimize a certain people’s political speech and to send a message that our government can and will take action against speech it doesn’t like,” Tlaib said, reported The Hill.

Maher upset Tlaib for calling BDS a “[expletive] purity test by people who want to appear woke but actually slept through history class.”

“It’s predicated on this notion, I think it’s very shallow thinking that the Jews in Israel, mostly white, and the Palestinians are brown, so they must be innocent and correct, and the Jews must be wrong,” he said on his show earlier this month. “As if the occupation came right out of the blue, that this completely peaceful people found themselves occupied.”

Maybe folks should boycott his show.

I am tired of folks discrediting a form of speech that is centered on equality and freedom. This is exactly how they tried to discredit & stop the boycott to stand up against the apartheid in S. Africa. It didn’t work then and it won’t now. https://t.co/Oa49ZVfrVN

“Forget about the intifadas and the suicide bombings and the rockets and how many wars,” he added. Because of comments made by Tlaib and Omar, Maher said, he can see why they “don’t get a hero’s welcome.”

Tlaib took to Twiter to suggest that “folks should boycott his show,” adding: “I am tired of folks discrediting a form of speech that is centered on equality and freedom. This is exactly how they tried to discredit and stop the boycott to stand up against the apartheid in S. Africa.”

“It is outrageous that Tlaib, who has repeatedly deployed anti-Semitic tropes, would promote the boycott of the only democracy in the Middle East and the one nation that fully respects human rights and guarantees freedom for Muslims, Christians, and Jews. Serious questions need to be asked about Tlaib’s motivation in supporting the extremist BDS Movement, which is allied with terrorists and is not shy about its ultimate aim of destroying Israel,” Ronald Lauder, president of the group, said in a statement.

“We find it concerning that a member of the U.S. Congress would lobby for BDS and so easily suggest that Maher’s show should be boycotted simply because he expressed an opinion with which she disagrees.”