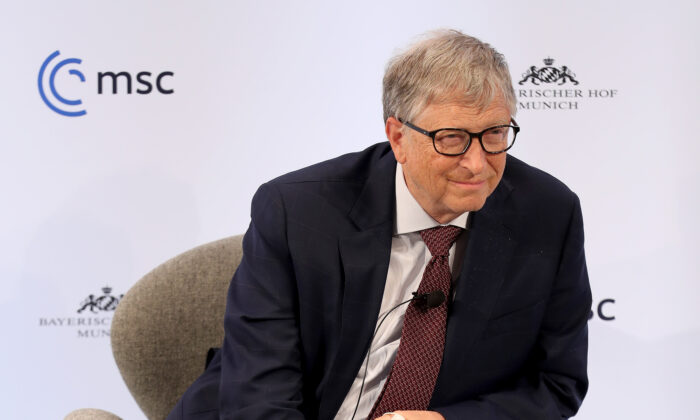 Bill Gates speaks during a panel discussion at the 2022 Munich Security Conference in Germany on Feb. 18, 2022. (Alexandra Beier/Getty Images)
Environment

Bill Gates has said that it is impractical to insist on reducing meat consumption in order to combat climate change.

“Anyone who says that we will tell people to stop eating meat, or stop wanting to have a nice house, and we’ll just basically change human desires, I think that that’s too difficult,” Gates said in an interview with Bloomberg. The billionaire went on to point out that such things do not necessarily have to play a key role in fighting climate change.

Rich nations only make up a third of global emissions, with the remaining two-thirds coming from “pretty basic” things like shelter, calories, transport, and the use of goods, Gates said.

Even if the “excesses” of rich nations are curbed out of existence, it still won’t be a solution to the climate change issue, he insisted.

“I’m looking at what the world has to do to get to zero, not using climate as a moral crusade,” he said.

Though Gates took a stance against climate activists’ push to stop people from eating meat, he said he supports societies switching to synthetic meat.

In an interview with MIT Technology Review last February, Gates said that he believes all rich countries should move to 100 percent synthetic beef. Though there might be a difference in taste between real and synthetic meat, Gates claimed that companies will make it taste better over time.

“Eventually, that green premium is modest enough that you can sort of change the [behavior of] people or use regulation to totally shift the demand,” he said.

However, Gates added that the poorest 80 nations will likely not be eating synthetic meat. For Africa and other poor nations, the billionaire expects animal genetics to “dramatically” increase the amount of beef per emissions.

Eating meat is beneficial to the human body. One study conducted by researchers from the Queensland Brain Institute (QBI), Australia, found that selenium, a mineral found in meat and some other foods, has the potential to reverse the decline in brain function from old age or poor health.

Another study conducted by researchers from the University of Adelaide looked into the health effects of total meat consumption in more than 170 nations. They found that consumption of energy from meat does result in greater life expectancy.

Some studies have linked meat-free diets with improved health. However, nutritionist Yanfei Ge thinks that such research might be biased, according to a Feb. 22 press release.

“Studies looking into the diets of wealthy, highly educated communities, are looking at people who have the purchasing power and the knowledge to select plant-based diets that access the full nutrients normally contained in meat,” Ge said. “Essentially, they have replaced meat with all the same nutrition meat provides.”