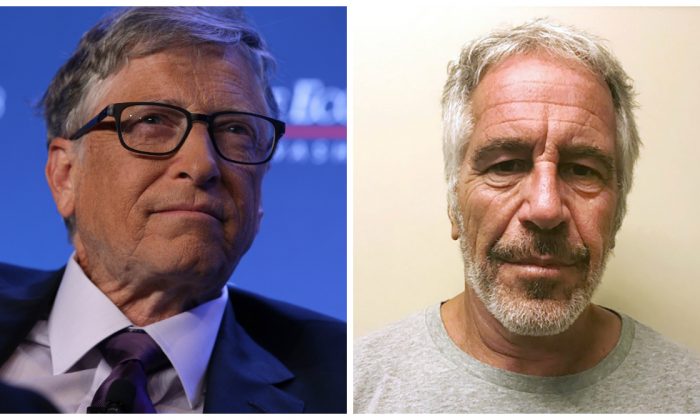 Bill Gates says he did not have a relationship with convicted sex offender Jeffrey Epstein even though flight records show that Gates flew with Epstein from New Jersey to Florida in 2013.

A spokeswoman for Gates told Charles Gasparino of Fox Business that Gates did not have a personal or business relationship with Epstein despite the flight logs. She declined to comment on the logs.

A request for comment sent by The Epoch Times did not receive a response by publication.

The logs showed that Gates flew with Epstein from Teterboro Airport to Palm Beach, Florida, on March 1, 2013, reported the Daily Mail.

Spokeswoman for @BillGates denies any personal or biz relationship with Jeffrey Epstein despite Gates being on flight logs for Epstein’s jet in 2013; Spokeswoman will not comment on flight logs more now @FoxBusiness

Gates and Epstein spent time outside the flight together. They both attended the Edge Dinner, an annual event where billionaires gather and discuss the latest innovations and experiments in math, science, and technology. Epstein’s billionaire status was under question before the financier was found dead in his cell on Aug. 10 while awaiting trial on sex trafficking charges.

Epstein also claimed at one point that he was an unofficial financial adviser to Gates.

“Epstein’s discussions with Gates included at least one meeting, which took place in New York in 2013, while Gates was still Microsoft’s chairman, these people said,” the outlet reported. “It was unclear whether the two also spoke on the phone.” There were also other people, described as philanthropic leaders, at the meetings, according to the sources.

The sources said that the 2013 flight was for Gates to travel to meet his family, who were in Palm Beach. A spokeswoman for Gates told CNBC: “Epstein never provided tax, estate or services of any kind to Bill Gates.” She did not deny that Gates and Epstein met.

Epstein was a convicted sex offender after 2008 when he pleaded guilty to two smaller counts after being accused of molesting over 100 underage girls. He was in jail on child sex trafficking charges when he killed himself on Aug. 10.

The connection between Gates and Epstein came to light as Boris Nikolivic, a former scientific adviser to Gates, was named as one of Epstein’s estate executors. Epstein signed his will two days before his death.

Nikolivic told Bloomberg he was “shocked” to be included in the will.

“I was not consulted in these matters and I have no intent to fulfill these duties, whatsoever,” he said in a statement.

Epstein transferred the $578 million in assets to a trust in the will. Nikolivic was named as a “successor executor,” or a backup in case the two executors, Darren Indyke and Richard Kahn, cannot perform executor duties.

A source told Bloomberg that Nikolic praised Epstein’s financial advice while talking to private bankers before a public offering of a gene company he founded, Editas Medicine, and Nikolic’s spokeswoman admitted the businessman was part of a network that overlapped with Epstein’s.

Epstein often ran in prominent science and business circles, meeting with Nobel Prize winners and people so famous they were known by non-scientists, such as Stephen Hawking, who attended a conference sponsored by Epstein in the U.S. Virgin Islands and spent time on Epstein’s private island in the chain, Little St. James.

Lawrence Krauss, a cosmologist who arranged a meeting of 21 physicists on Epstein’s island in 2006, said that “as a scientist,” he didn’t see any reason to believe Epstein was doing anything criminal.

“I always judge things on empirical evidence,” he told the Daily Beast, “and he always has women ages 19 to 23 around him, but I’ve never seen anything else.”

Even after he served over a year for admittedly recruiting a young girl for sex, his connections stayed strong.

The alleged financier held an intimate dinner with Prince Andrew in 2010, with attendees including political and media figures including George Stephanopoulos, Katie Couric, and Charlie Rose.

Stephanopoulus recently expressed regret for going to the dinner: “I should have done more due diligence. It was a mistake to go.”