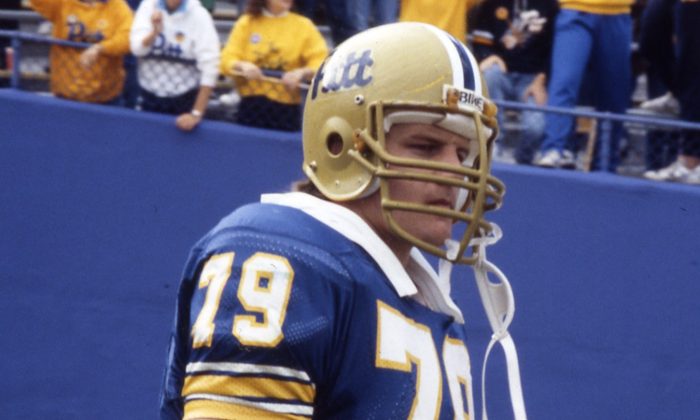 Former NFL offensive lineman Bill Fralic, who was named to the Pro Bowl four times and was a two-time All-Pro selection, died at the age of 56. (University of Pittsburgh)
NFL

Former NFL offensive lineman Bill Fralic, who was named to the Pro Bowl four times and was a two-time All-Pro selection, died at the age of 56, according to reports.

“Bill is truly one of the iconic figures in the history of Pitt Athletics,” University of Pittsburgh athletic director Heather Lyke said. “He set a tremendous standard for our current generation of student-athletes, not only as an athlete but also for what he went on to accomplish once his playing days concluded.”

Fralic was known for being an anti-steroid advocate. In May 1989, he testified before the U.S. Senate, saying that steroid usage in the NFL is commonplace, and he also advocated for random drug testing.

It is with a truly heavy heart & deep sadness that we have learned of the passing of our friend, Bill Fralic. He will be remembered as greatest o-lineman, ever, and as a true gentleman. He was our friend, our teammate, our brother. #pennhillspride @Pitt_FB @AtlantaFalcons pic.twitter.com/HkXurdD4UX

Former Vice President Joe Biden, then a U.S. Senator from Delaware, said his Senate testimony was “refreshing and believable,” reported the Atlanta Journal-Constitution.

In a 1990 Sports Illustrated story, “We can clean it up,” detailed Fralic’s steroid use, describing the weight room culture in college and in the NFL.  “Everybody else is doing them,” he said, reported the Post-Gazette. “If I want to be a player, I’ve got to do them.”

“You’ve got to do something about steroids. They’re a huge problem in this league,” he also told former NFL commissioner Pete Rozelle at the time.

Fralic said that at the time, 75 percent of lineman, tight ends, and linebackers in the league used steroids, according to the Post-Gazette.

He also previously made comments about potential brain trauma caused by collisions sustained while playing in the NFL.

We lost a legend today.

“I am all for them trying to help the former players get the help they need. I remember having one, maybe two during my career. But I would go at someone with my forehead every play and that is a lot of trauma,” he said, according to the Journal-Constitution report about him.

And regarding if head trauma will affect him, “I don’t worry about it. I am aware that it could either happen or will happen,” Fralic once said.

“But I still like the game better the way it was played when I was in it. If I had kids I would let them play. The rewards outweigh everything else,” he continued.

Fralic played nine NFL seasons between 1985 and 1993, including eight for the Atlanta Falcons. He spent the other season playing for the Detroit Lions. He started in 131 of 132 games he played in and was named as an All-Pro in 1986 and 1987.

“Bill Fralic was not only an all-time player at the University of Pittsburgh, but also an all-time human being,” Pitt head football coach Pat Narduzzi stated in the college news release. “His generosity, support and concern for others was unmatched. For as hulking a figure as he was, Billy was even larger in his kindness and passion for others. He leaves a wonderful legacy that goes well beyond football at Pitt, Penn Hills and all of Western Pennsylvania. Our hearts and prayers are with his wife, Susan, and all of his loved ones.”