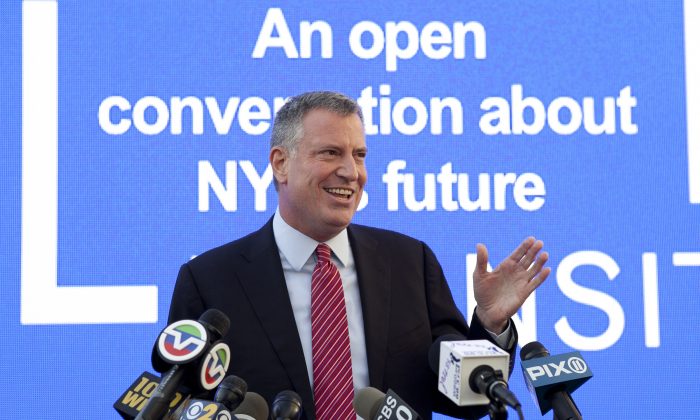 If approved, the tax hike will raise the income tax on those making $500,000 by less than 1 percent, and will need approval from the House of the state Legislature and a signature from Gov. Andrew Cuomo.

Assembly Democrats probably won’t pose the biggest roadblock to getting the tax hike approved. Senate Republicans, who along with the rest of the Legislature is up for re-election in 2014, have begun to talk tax cuts.

“We support universal pre-k,” said Senate GOP spokesman Scott Reif by phone Monday. “The question is how do you pay for it?”

When asked by another reporter if he had set up meetings with Sen. Dean Skelos, de Blasio said no, but added he hopes to do so by early January.

“I think Senator Skelos will be open minded, judging from the statements he has made, on the importance of early childhood,” de Blasio said.

“Right now, our central concern is, not surprisingly, picking key members of our administration and preparing for the budget presentation,” De Blasio added.

De Blasio mentioned before the Thanksgiving holiday he is forming a working group and will announce plans for a full-scale campaign to promote his agenda. The de Blasio team will organize a grass roots effort to lobby politicians against the tax hike.

Not all Assembly members were excited about the meeting. Freshman Republican Assemblyman Kieran Lalor sent out a scathing statement condemning de Blasio for meeting with Assembly Speaker Sheldon Silver.

“It’s disappointing to see Bill de Blasio sit down with corruption-plagued Assembly Speaker Sheldon Silver, pretending that there is nothing wrong,” Lalor said in the statement. He claimed Silver is at the root of corruption in Albany. No formal charges have been filed against Silver.

“Mayor-elect de Blasio should join the call for reform and refuse to meet and negotiate with Silver,” Lalor said. “De Blasio can’t tout himself as a progressive leader while tolerating Silver’s corruption.”

Lalor was not at the meeting, according to a spokesman in his office.