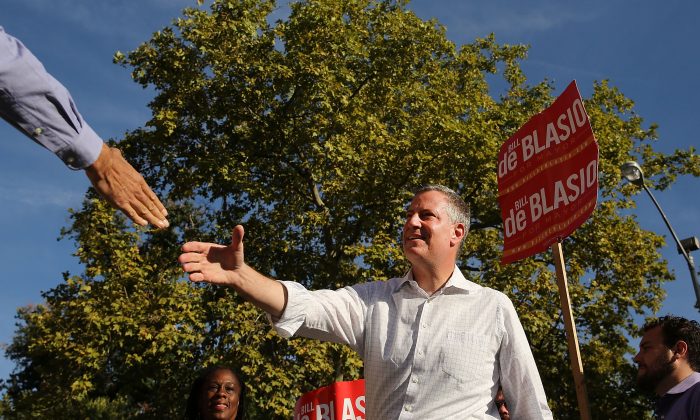 NEW YORK—After handily securing a primary night victory, Democratic mayoral nominee Bill de Blasio had disappeared from the streets that helped elect him, only hosting staged press conferences and endorsement events. The press grumbled, editors opined, and on Thursday, the candidate was forced from hiding.

After over two weeks, de Blasio re-emerged on the streets of Central Harlem, not only to greet with voters, but explain his absence to the press.

“We have had a period of reset in this race,” de Blasio explained. “First we were not sure there would be a run off, and now we are getting ready for a very vigorous election campaign.”

With his wife Chirlane McCray by his side, he promised his campaign was gearing up and we should expect plenty more meet and greets in the future.

If the Harlem stop was any indication of the reset de Blasio, supporters should learn to be quick. After speaking with the press for just over seven minutes, de Blasio greeted supporters—who had to form a line to see him—for just over 10 minutes. He was cordial, even offering his card with a helpful number for a gentleman looking for help with children’s services. But it was quick.

Then he walked across 116th Street to his awaiting black SUV—the right one this time—and left.

This week has been one of the roughest in the campaign thus far, with de Blasio, who had not received much negative press during the primary, taking several big blows. On Monday, the New York Times unearthed his youthful ties to the Sandinistas, a far left party in Nicaragua. Republican challenger Joe Lhota has been hammering him on the subject all week, leaving de Blasio on the defensive, a position he has not had to fight from for weeks.

Despite nearly a week of bad press, Thursday did bring a glimmer of good new from the de Blasio camp. The campaign announced former Secretary of State Hillary Clinton, whom de Blasio had worked for during her Senate campaign, will host a fundraiser for him next month.

“She is now going above and beyond the call, agreeing to be the featured guest at one of our fundraisers next month,” de Blasio said. “That is incredibly exciting. It will bring a huge amount of support.”