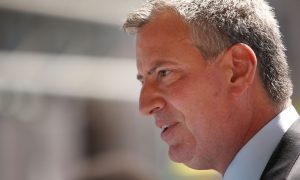 “There is something authentic and consistent about expressing my views through the prism of family,” de Blasio said at a campaign stop in Brooklyn. “It summarizes a lot of who I am and what I stand for.”

In the 30-second spot, de Blasio’s son, who has been a staple with him on the campaign trail, opens by claiming his father is the “only Democrat with the guts to really break from the Bloomberg years.”

As public advocate, de Blasio has been an outspoken critic of the current mayor on issues from the treatment of small business, to education, to police practices.

Mid-way through the ad, Dante says, “and he’s the only one who will end a stop-and-frisk era that unfairly targets people of color.” De Blasio has not publicly called for an end to stop-and-frisk, however he is the only leading candidate that supports both the Inspector General bill, which will create an oversight office for the NYPD, and the new racial profiling bill, which will not only expand who is protected, but allow citizens to sue if profiled.

Both bills, which passed the City Council after a fiery late-night debate on June 27, were vetoed by the mayor at the end of July. The Council has vowed to override his veto at the August 22 Stated Meeting.

De Blasio said he and his wife, Chirlane McCray, have already spoken to Dante about how to handle a stop.

“We have prepared Dante repeatedly for the fact that, no matter how good a young man he is, he has to be ready for that reality,” de Blasio said. “It is a very painful conversation and it is a conversation parents all over the city have every day.”

Dante has never been stopped, according to his father, but the elder de Blasio is unsure how long that record will last.

“I think if current policies continued, it would be inevitable, but to this day, thank God, he has not,” de Blasio said.

Fellow candidate Christine Quinn launched her first advertisement in mid July. Bill Thompson, also running for the Democratic nomination, has yet to release a television ad.

Watch the ad below: