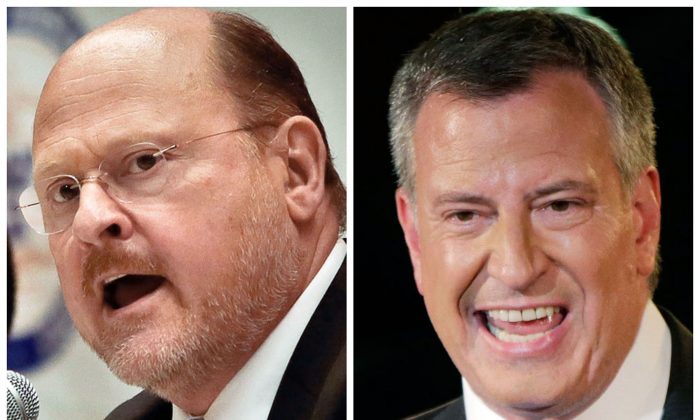 NEW YORK—On Friday morning, speaking at an Association for a Better New York (ABNY) breakfast in midtown, Democratic mayoral candidate Bill de Blasio went off script calling himself a “fiscal conservative” when asked about taxes associated to the tourism.

“Those who have had to address this challenge [balancing budgets] … they will tell you, you don’t give away anything until you know what you are dealing with,” de Blasio said. He was responding to a question about possibly eliminating the Jacob K. Javits Convention Center tax, which is a $1.50 per night hotel room occupancy fee.

De Blasio said he had attended 60–70 mayoral forums, and at each one, people would ask him to commit to decreasing a tax, or to allocating portions of the budget to a group or cause.

“I say no to all of it honestly, respectfully, because we are going to have a real fiscal challenge ahead because of the open labor contracts,” de Blasio said. He added the federal government shutdown would also bring fiscal challenges.

The comment bordered on comical since nothing de Blasio has pinned himself to be could be described as “conservative.”

After hearing the comment, Republican rival Joe Lhota sent out two emails charging that de Blasio’s record shows him as anything but a “fiscal conservative.”

“I hurt myself laughing at that,” Lhota said prior to attending an event in Manhattan. “He is not a fiscal conservative. He has raised fees, taxes, spending in the city of New York like a drunken sailor would.”

The email claimed de Blasio was partly responsible for the huge increase in spending by the city. As Public Advocate, de Blasio has no power to create the city budget (that is done by the mayor), but he could raise issues through the City Council.

According to the email, spending in the Public Advocate’s office increased by 27 percent from fiscal year 2010 to 2013.

Lhota has pegged himself as the candidate with the fiscal chops needed to run the city’s complex budget. But at Friday’s breakfast, de Blasio challenged that claim, saying, “I think it is irresponsible to talk about giving away revenue until we know what we are dealing with.”

The comments were referring to Lhota’s proposed tax cuts, which are a substantial part of his plan to grow jobs. The cuts would decrease revenue to the budget if implemented.

When quizzed by another reporter about the impact his proposed tax cuts would have on the budget, Lhota said the figure given by the reporter of $2.5 billion was not accurate.

“If you get rid of all of them—but no one has recommended that. Anyone who calculates the numbers that way is using incorrect information,” Lhota said. He added his record as budget director shows he can find areas of savings.

“Mark my words, I can find a budget director that will do exactly what I did,” Lhota said.