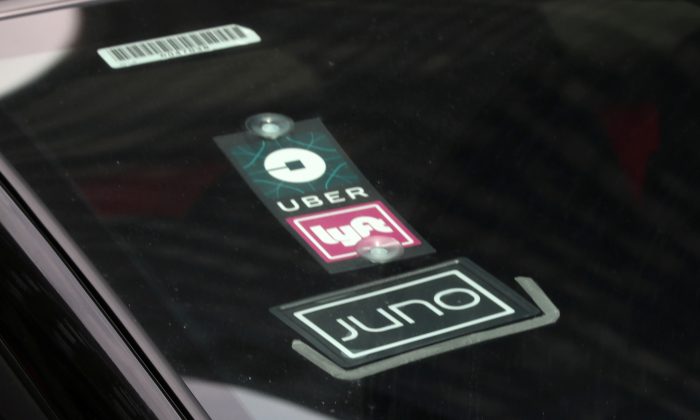 The Uber, Lyft and Juno logos are seen on a car as it drive up 6th Avenue in New York City, July 27, 2018. (Mike Segar/File Photo/Reuters)
Northern California

Bill Could Give Uber Drivers Employee Status — At What Cost?

A bill that imposes limits on who can be a contractor in California could radically change how gig economy firms such as Uber, Lyft, DoorDash, Postmates and others operate. AB5 passed the state Assembly and is now being reviewed by the Senate Appropriations Committee, with an upcoming hearing scheduled for Aug. 12.

According to some experts, while the bill would make some contractors happy, as many have been pressuring companies like Uber to offer benefits, the overall picture might not be a positive one.

Regardless, many ride share workers are excited, and some are even confident the state’s legislature is on their side.

At the time, the state’s highest court ruled in favor of contractors who wanted employee status. With AB5, legislators would require that more employers use the “ABC test” to check whether workers should have employee status.

While the legislation would exempt contractors in the insurance, investment, real estate, and hairstyling industries, as well as others working under a professional services contract, companies like Uber and Lyft are expected to pressure the state’s senate to further restrict the language of the bill.

In an email interview with The Epoch Times, Los Angeles employment attorney Angela Reddock-Wright conceded that the state’s high costs of living may have a lot to do with contractors’ decision to support this type of legislation. However, she added, “some [Uber and Lyft] drivers still might pursue the issue as a matter of principle and the sincere belief that they are employees and not independent contractors.”

Over the decades, she further explained, the employment sector changed considerably thanks to technological advances. It’s precisely because the world has changed that legislators should try to keep up.

But for an economy to be successful, she added, California needs both businesses and individuals, and for them to work together, all parties must be happy.

“We need to begin to think beyond traditional notices of ‘employees’ and ‘contractors’ and think about a third category that meets the needs of both individuals and businesses.”

Christopher Westley, a professor of economics in the Lutgert College Business at Florida Gulf Coast University, told The Epoch Times that the proposed regulatory changes in AB5 were likely influenced by a very one-sided industry: the labor force.

“Regulations like this are often promoted by existing competitors that are already incurring their costs in order to impose costs on potential competition,” he said.

Gonzalez Fletcher, the bill’s main sponsor, is a Democrat with well-known ties to the labor industry. During her four public office campaigns, she received over $1 million in total contributions from the sector. And organized labor has been one of the most supportive special groups behind the effort.

In a blog post on the California Labor Federation’s website, the organization is clear in its defense of AB5, arguing that all workers deserve “basic job protections.”

Because gig economy companies might seem “disruptive,” Westley told The Epoch Times, “governments might be trying to reduce its inherent advantages.”

By pushing legislation like AB5, he said, the price differences between Uber-type companies and competitors may then be reduced. This would benefit old world industries like the taxi cab sector. But at what cost?

“With legislation, [Uber and Lyft drivers] are ensured that there will be a reduced supply of ride-sharing activity. In that case, some drivers will be forced to find other types of employment, including providing ride-sharing services on extra-legal markets.” In other words, they could be pushed to the black market, offering rides for cash to consumers willing to take the risk.

But unhappy ride share workers might not necessarily be worried about the long-term consequences of AB5. Instead, many are hopeful.

Despite the opinions of some experts and industry insiders, Rebecca Stack-Martinez, an organizer for San Francisco-based Gig Workers Rising, told The Mercury News they “remain optimistic that California will continue to be a policy leader and pass legislation protecting gig workers.”