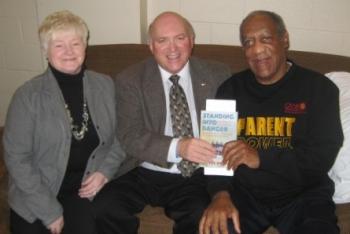 Bill Cosby invited St. Lawrence Mayor Wayde Rowsell and his wife, Carmelita, to attend his show in St. John's, Newfoundland and Labrador (NL), on Dec. 4, 2009, and also to meet him backstage prior to the show. The men are holding 'Standing into Danger,' a book by Cassie Brown about the U.S. naval disaster off the coast of NL in WWII and the dramatic rescue by the people of the nearby towns of St. Lawrence and Lawn. (Courtesy of Wayde Rowsell)
US

Mary Silver
Mary Silver writes columns, grows herbs, hikes, and admires the sky. She likes critters, and thinks the best part of being a journalist is learning new stuff all the time. She has a Masters from Emory University, serves on the board of the Georgia chapter of the Society of Professional Journalists, and belongs to the Association of Health Care Journalists.
View profile
Follow
biggersmaller
Print
Bill Cosby flew into St. John's, Newfoundland and Labrador, early last weekend because he knew bad weather was coming—sleet, hail, wind. He was there to perform, but he made sure to mark the special link the area has with the American civil rights movement.

During World War II, U.S. Navy ships Truxton and Pollux wrecked off the coast of the Atlantic province. The nearby townspeople of St. Lawrence and Lawn saved 186 lives . One of those sailors was Lanier Phillips, who went on to desegregate the Navy. Had the Canadians not saved him, a remarkable chapter in American history would be missing. Georgia native Dr. Phillips marched with Martin Luther King. In a time when black military men could only be servants, he became a sonar technician.

His story is better known in Canada than in the United States. Navy veteran Cosby, who also worked for civil rights, learned of Lanier Phillips when he saw a documentary in Ottawa. He was so moved he invited Phillips to appear on stage with him this summer in Washington D.C. Phillips got a standing ovation.

When Cosby visited Newfoundland, he invited St. Lawrence Mayor Wayde Rowsell and his wife, Carmelita, to be his guests. He also called and thanked the son of Violet Pike, the woman who took a nearly drowned Phillips into her home.

When the ships ran aground, severe weather, darkness, and steep terrain made the rescue very dangerous.

People risked their own safety to help the strangers. Mayor Rowsell deflected praise of the courage of his town’s people.

“Lanier is the guy who endured so much and persevered and he deserves all the credit. He certainly made a difference in this world. I guess when you look at Lanier’s life it certainly resonates with Mr. Cosby’s message that you should use the resources that you have. Do ordinary things to create extraordinary results. That is the story of Mr. Lanier Phillips.”

Rowsell said everyone on the ships would have been lost had no one helped them. He said the culture of his part of the world requires helping others. “Seafaring people respond that way.”

“We’re a people that reach out to others. We have humble beginnings but our concern for others is immeasurable.”

For five years, Rowsell has hoped the two countries may start an international park to honor the survivors, the rescuers, and the sailors who perished. Many Americans come to visit the site. The Canadian government has given US$250,000 to redevelop a shipwreck trail. An initiative from the American side would be welcome. Rowsell said a presidential proclamation or an act of Congress might be necessary to make it happen, and of course those events are not common. Phillips lives in the District of Columbia, which means he has no senator or congressman to tell his story.

Rowsell will continue to celebrate the historic link his town has with the United States. He feels it is important to keep “the memory and honor of the ship’s crew alive.”

He said the visit from Cosby was the experience of a lifetime.

“It’s been said if you can laugh, you’re rich. There were a lot of rich people at that show. [Cosby] is a great believer in and promoter of civil rights and justice.

"He certainly promotes kindness and generosity and tolerance as a cornerstone of everything.”