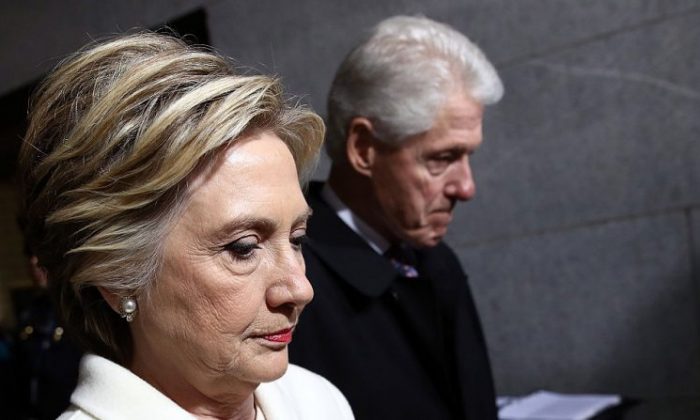 Before Bill Clinton traveled to Russia to give a $500,000 speech in the summer of 2010, he asked for permission to meet a key Russian nuclear industry official, raising concerns of a potential conflict of interest among his aides and officials in the State Department, The Hill reported, citing government records obtained through Freedom of Information Act requests.

At the time, Hillary Clinton led the State Department, one of the several agencies considering an approval for a controversial nuclear deal that would give Russia control of 20 percent of U.S. uranium supply.

Arkady Dvorkovich, the Russian official Bill Clinton wanted to meet, was on a list of 15 names sent to the State Department on May 14 for approval ahead of his June trip to Russia. A foreign policy adviser sent the request to Hillary Clinton’s team at the State Department, including her top advisers, Jake Sullivan and Cheryl Mills.

“In the context of a possible trip to Russia at the end of June, WJC [Bill Clinton] is being asked to see the business/government folks below,” wrote Amitabh Desai, a foreign policy adviser for the Clinton Foundation. “Would State have concerns about WJC seeing any of these folks?”

Desai did not receive a response for two weeks and, again, reached out. Sullivan eventually responded by checking with another department official on how to deal with the request.

It is unclear what ultimately happened with Desai’s request, but aides to both Bill and Hillary Clinton told The Hill that meetings with the officials were eventually canceled due to conflicts of interest with at least two people on the list.

Dvorkovich was the first person on the list to raise concerns. He was the chief deputy to then-Russian President Dmitri Medvedev and a cheerleader for the Russian nuclear industry. More concerning, he sat on the board of directors of Russian state-controlled nuclear-giant Rosatom, the company that was seeking the controversial approval to buy Canadian company Uranium One, which controls 20 percent of U.S. uranium.

The Obama administration approved the purchase of Uranium One roughly four months after Bill Clinton’s trip to Russia. It did so despite the FBI having substantial evidence of a massive bribery, extortion, kickback, and money laundering scheme against the U.S. nuclear industry, The Hill reported earlier this week.

The FBI referred the case to the Department of Justice (DOJ), which continued to investigate it for four years. Meanwhile, neither the FBI nor the DOJ appears to have shared their intelligence with the committee tasked at the time to vet the Uranium One deal.

The Uranium One deal was approved by a panel of 14 government agencies and offices, any one of which could halt the approval by escalating their concerns to the president. The Committee on Foreign Investment in the United States (CFIUS) is tasked specifically with vetting transactions by foreign entities for national security purposes.

CFIUS approved the deal in 2010, saying there were no national security concerns, unaware of the rampant bribing scheme that the FBI had uncovered on U.S. soil.

Current and former aides to Bill and Hillary Clinton were also concerned with Bill Clinton collecting a $500,000 speaking fee, one of the highest he ever earned for a one-day engagement, shortly after Hillary Clinton visited Russia.

Meanwhile, Renaissance Capital, the bank paying Bill Clinton the hefty speaking fee, was actively promoting the Uranium One deal and gave it a favorable investment rating, while Hillary Clinton’s State Department was one of the agencies approving the deal.

Hillary Clinton alleged that she had a lower level official handle the Uranium One approval on her behalf. The official said that Hillary Clinton did not exert pressure on any CFIUS matter.

The Uranium One deal was significant to Rosatom, with the company billing it one of the “striking events” of the year in its annual report. The deal would allow Russia to start “uranium mining in the United States,” the report states.

Nick Merrill, a spokesperson for Hillary Clinton, said that the Uranium One story “has been debunked on the merits.”

“Its roots are with a project shepherded by Steve Bannon, which should tell you all you need to know,” Merrill said. “This latest iteration is simply more of the right doing Trump’s bidding for him to distract from his own Russia problems, which are real and a grave threat to our national security.”

President Donald Trump referenced the Uranium One deal several times during his presidential campaign. He emphasized the importance of The Hill’s reporting to media in the Oval Office on Thursday, noting that mainstream media won’t cover it because it “affects people they protect.”

“That’s your story. That’s your real Russia story. The real story is uranium,” Trump told reporters. “Not a story where they talk about collusion, and there was none. It was a hoax. Your real Russia story is uranium and how they got all of that uranium—the vast percentage of what we have. That, to me, is one of the big stories of the decade. Not just now. The decade.”

The revelations from The Hill’s investigative piece have already triggered action from Congress and the DOJ.

The Senate Judiciary Committee has opened a probe into the matter. Sen. Chuck Grassley (R–Iowa) also requested that the DOJ lift a gag order from the FBI informant who has more information on how Russians influenced the Uranium One decision.

Attorney General Jeff Sessions said that the DOJ will review the matter.