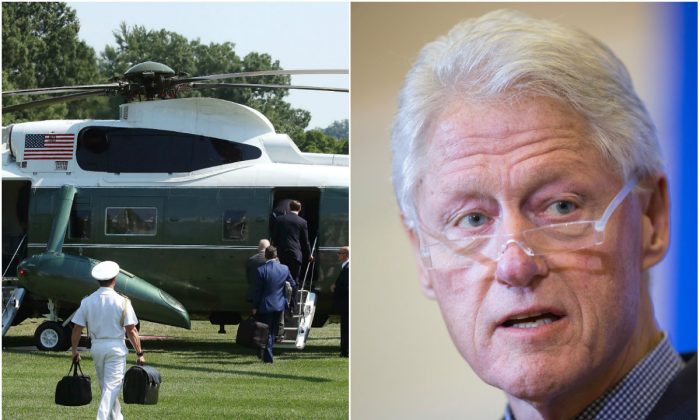 L: A military aide carries the nuclear football as he departs with President Trump on Marine One from the White House on Aug. 4, 2017. (Mark Wilson/Getty Images); R: Former President Bill Clinton on Jan. 7, 2016, in Dubuque, Iowa. (Scott Olson/Getty Images)
US News

Gen. Hugh Shelton served under Clinton as chairman of the Joint Chiefs of Staff. He also recently published a memoir, “Without Hesitation: The Odyssey of an American Warrior.”

In the book, he recalls the bone-chilling situation, ABC News reported.

“At one point during the Clinton administration,” Shelton writes, “the codes were actually missing for months. … That’s a big deal—a gargantuan deal.”

The codes are kept on a small plastic card that the president always keeps with him.

“As president, I carried no wallet, no money, no driver’s license, no keys in my pockets—only secret codes that were capable of bringing about the annihilation of much of the world as we knew it,” wrote Ronald Reagan in his autobiography “An American Life.”

The card is dubbed the “biscuit” and serves to prove that authorization for a nuclear strike indeed comes from the president.

Shelton said no one has ever revealed that Clinton lost the biscuit. But retired Air Force Lt. Col. Robert Patterson recalled a similar episode in his book published seven years ago.

Patterson was one of the men who carried the “nuclear football,” a briefcase containing the launch codes and instructions for nuclear retaliation. The football is carried by a military aide with the highest background clearance and who accompanies the president at all times.

Patterson said that the morning after the Monica Lewinsky scandal broke he requested the president present the card so that he could swap it out for an updated version, which is a standard procedure.

“He thought he just placed them upstairs,” Patterson wrote. “We called upstairs, we started a search around the White House for the codes, and he finally confessed that he in fact misplaced them. He couldn’t recall when he had last seen them.”

In Patterson’s book, Clinton lost the biscuit in 1998, but that differs from Shelton’s account, who placed the event in 2000.

The nuclear football dates back to the time of President Dwight D. Eisenhower and has gone through its share of mishaps.

President George H. W. Bush reportedly took off after a tennis match without his football-carrying aide. The aide, with assistance from Secret Service agents, caught up with the president some 15 minutes later.

Bill Clinton made a similar blunder in 1999 when he left a NATO summit meeting leaving the football behind. Fortunately, the summit was held at the Reagan building and Clinton sped away toward the White House, so the aide simply walked the half-mile between the two buildings to catch up with the head of the free world, BBC reported.

Clinton was also not the only president who allegedly got separated from the biscuit.

President Jimmy Carter allegedly sent it with his coat to the dry cleaners, although that story was never confirmed. And Ronald Reagan was separated from the biscuit after he was shot during the attempt on his life. Reagan carried the codes in a small pocket in his coat and the emergency room personnel had to cut off his clothes. It was allegedly found in his shoe on the emergency room floor.