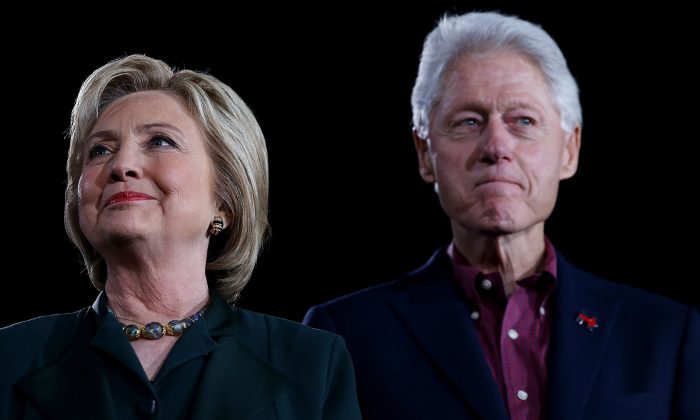 Former President Bill Clinton prompted more speculation that Hillary Clinton might run for the presidency in 2020.

“She may or may not run for anything, but I can’t legally run for president again,” Clinton said, according to RealClearPolitics.

He made the statement while sitting next to wife Hillary Clinton, a former senator and secretary of state, and Supreme Court Justice Ruth Bader Ginsburg at an event at Georgetown University School of Law.

The former president’s comments came after a former adviser, Philippe Reines, said that she might run for president again.

Reines later said that she suspects she might be the best person to defeat Trump.

“She really likes a lot of the people running. She knows them well. She thought about some of them for her vice presidency,” Reines said. “But there might be a reason that she’d be the best person, not only to beat Donald Trump, but to govern after Donald Trump, which is a part we don’t talk about much. And, look, you can make fun of her all you want, but 65 million people voted for her and that’s second more to anyone except Barack Obama.”

A former adviser to Bill Clinton, Dick Morris, suggested that Hillary Clinton will join the race if Joe Biden drops out.

Voters will want an alternative to Sen. Elizabeth Warren (D-Mass.), whom he described as having left-wing policies.

“The question is are there enough moderates to beat Elizabeth Warren the leftist?” he asked. “Make no mistake. She wants it,” Morris added. “She’s planning on it. She’ll do everything she can to achieve it.”

Earlier this month, Hillary Clinton sparred with Democratic candidate Tulsi Gabbard, alleging that the Hawaii congresswoman is a Russian asset.

Other reports from the New York Times and Washington Post, which cited anonymous sources, have recently claimed that Clinton hasn’t yet ruled out running again.

Some Senators Say ‘No’

“She’s done a great service to our country and public service, and I supported her wholeheartedly, but I believe it’s time for another nominee,” said Senate Minority Whip Dick Durbin (D-Ill.), reported Politico last week.

“I don’t think it would be good for her,” Sen. Jon Tester (D-Mont.) told the website. “She’s been through this war once. The Republicans have made a target out of her for 30 years and she’s still going to [be] that same target. I just think it would be tough.”