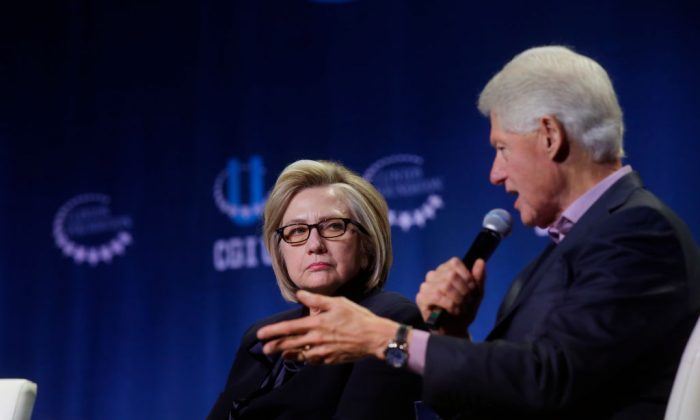 Bill Clinton dined with financier Jeffrey Epstein in 1995 while he was president, according to a report at the time.

The Palm Beach Post said in a March 31, 1995, story that Clinton attended a dinner at the Palm Beach, Florida, home of Revlon tycoon Ron Perelman.

“Joining Clinton for a three-hour dinner was a very select group of people, some of whom, according to one Democratic Party source, gave as much as $100,000 to the Democratic National Committee for the privilege of dining with the president,” the Post reported.

It named Epstein, describing him as “a business executive,” as among the guests, along with singer Jimmy Buffett, actor Don Johnson, and Don Fowler, co-chairman of the committee at the time.

Federal election records showed that Epstein donated to Clinton while he was president.

According to the Center for Responsible Politics, Epstein donated more than $139,000 to Democratic federal candidates and committees from 1989 up until 2003, including Clinton. It wasn’t clear exactly how much he donated to Clinton.

“President Clinton knows nothing about the terrible crimes Jeffrey Epstein pleaded guilty to in Florida some years ago, or those with which he has been recently charged in New York,” the statement from Angel Ureña read.

Clinton’s team claimed he only took four trips on the plane.

“In 2002 and 2003, President Clinton took a total of four trips on Jeffrey Epstein’s airplane: One to Europe, one to Asia, and two to Africa, which included stops in connection with the work of the Clinton Foundation,” the statement continued.

Clinton never went to Epstein’s island in the U.S. Virgin Islands, his house in New Mexico, or his residence in Florida, Ureña said.

Investigative journalist and executive director of Alliance to Rescue Victims of Trafficking, Conchita Sarnoff, who has been covering Epstein’s case for over a decade said that Clinton was “not telling the truth.”

“I know from the pilot logs, and these are pilot logs that you know were written by different pilots and at different times, that Clinton went—he was a guest of Epstein’s—27 times,” she told Fox News, adding that “many of those times Clinton had his Secret Service with him and many times he did not.”

She also said that “almost every time that Clinton’s name is on the pilot logs, there are underage girls.”

One of the girls who accused Epstein of molesting them said that Clinton traveled to Epstein’s island in the Caribbean.