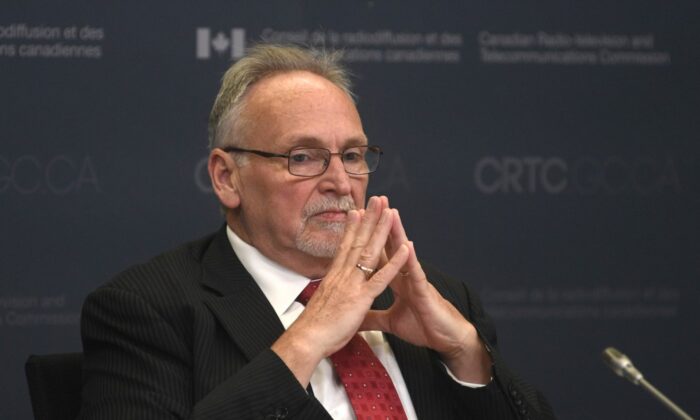 Ottawa is pursuing different pieces of legislation to regulate the internet, one of which intends to extend the government’s oversight of traditional broadcasting to the digital sphere and its platforms. While the government has said user-generated content will be exempt, the chair of the Canadian Radio-television and Telecommunications Commission (CRTC) said on May 18 that it won’t.

“As constructed, there is a provision that would allow us to do it as required,” CRTC chair Ian Scott told the House of Commons Standing Committee on Canadian Heritage.

But despite being granted the regulatory powers, Scott said the CRTC would not use them.

“There should be a higher degree of trust in relation to the commission’s future actions,” he told the committee, saying that in 50 years of broadcast regulation, the CRTC had “never interfered with individual content.”

Heritage Minister Pablo Rodriguez, who is responsible for Bill C-11, which seeks to amend the Broadcasting Act, told the House on Feb. 16 that his government had listened to critics of the previous version of the bill (Bill C-10) in the last Parliament and “fixed it.”

“In response to this debate, Bill C-11 clearly outlines that the regulator would have no power to regulate the everyday use of social media by Canadians,” Rodriguez said.

“Let me be clear. We will not regulate users or online creators through the bill or our policy, nor digital-first creators, nor influencers, nor users. Only the online streaming companies themselves would have new responsibilities under this act.”

A meeting of the Heritage committee on May 24 heard expert and stakeholder testimonies on Bill C-11.

Media and music industry representatives urged the adoption of the bill, while experts and a representative of a successful online content creator pushed back against granting the CRTC power over user-generated content.

University of Ottawa law professor Michael Geist, a critic of the bill, said that many concerns about C-10 “remain intact.”

“While the section 4.1 exception for user content was reinstated, the addition of section 4.1 sub 2 and 4.2, which together provide for the prospect of CRTC regulations on user content, were added,” said Geist, a Canada Research chair in internet and E-commerce law.

“The bottom line is that user content is treated as a program and the CRTC is empowered to create regulations applicable to programs that are uploaded to social media services.”

Geist said no other country in the world regulates user content in this manner and those sections should be removed from the bill.

Morghan Fortier, CEO of Skyship Entertainment, also pleaded for the removal of section 4.2, which she said “hands sweeping power to the CRTC to regulate the internet use of everyday Canadians and small businesses like mine, who are not even associated with broadcasters.”

Skyship produces online content for children such as the popular Super Simple Songs series, which has amassed over 1.3 billion views, Fortier said.

“If you don’t remove that section, you’re asking Canadians to just trust you that you won’t misuse this far-reaching law and that future governments won’t misuse it either. Thousands of Canadian small business and digital content creators deserve far more consideration than that,” she said.

Former CRTC commissioner and Epoch Times contributor Peter Menzies told the committee less regulations is what’s necessary to encourage investments and creativity, and if the bill’s main purpose is to better redistribute revenues from tech giants, then other sectors should be left alone.

“If you were to just make it clear in the legislation that it only applies to streaming companies with annual Canadian revenues of $150 million and more, the CRTC could then debate with them whether they are reinvesting in Canada and its cultural and industrial goals in an appropriate fashion,” said Menzies.

Troy Reeb, executive vice president of Corus Entertainment, also agreed that the bill shouldn’t regulate user-generated content, but he welcomes the other planned reforms outlined in the bill in part to level the playing field with foreign content producers who are not subjected to Canadian broadcasting regulations.

“We can no longer support the onerous regulatory framework of the past entirely on our own with no similar obligations on foreign players who don’t just operate in our marketplace, but now threaten to dominate it. The status quo is unsustainable,” said Reeb, whose company owns a number of radio stations and TV channels across the country.

Bill C-11 seeks to compel audiovisual content creators over radio, television, and the internet to produce Canadian content, which would be pushed forward by platforms in an “equitable proportion.”

It also adds progressive concepts to the broadcasting policy, stating that the Canadian broadcasting system should “serve the needs and interests of all Canadians—including Canadians from racialized communities and Canadians of diverse ethnocultural backgrounds, socioeconomic statuses, abilities and disabilities, sexual orientations, gender identities and expressions, and ages.”

The current Broadcasting Act of 1991 says the broadcasting system should “serve the needs and interests, and reflect the circumstances and aspirations, of Canadian men, women, and children.”