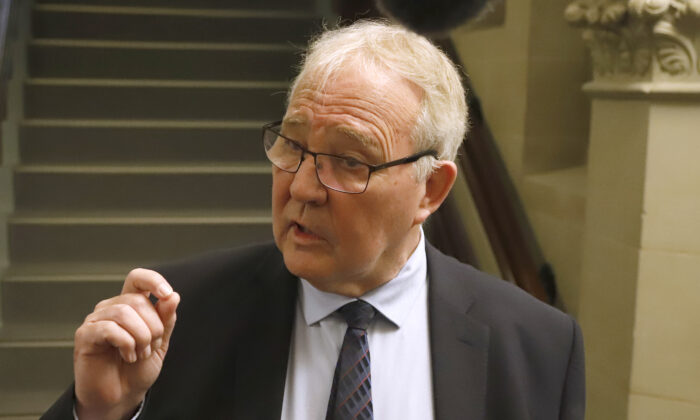 President of the Queen's Privy Council for Canada and Minister of Emergency Preparedness Bill Blair speaks with reporters as he arrives for a caucus meeting on Parliament Hill in Ottawa on June 22, 2022. (The Canadian Press/ Patrick Doyle)
Canada

Blair and Lucki are at the centre of a controversy sparked by a document released earlier this month by the Mass Casualty Commission (MCC), an inquiry that is looking into the April 2020 shooting in Nova Scotia that left 22 people killed.

The document included notes from RCMP Superintendent Darren Campbell that said, in an April 28, 2020 teleconference, Lucki had criticized senior RCMP managers who refused to make public sensitive information about the guns used in the killings.

In his letter, Campbell raised concerns about Lucki stating that she had “promised” the minister of public safety and the Prime Minister’s Office (PMO) that the RCMP would release the information, saying it would “jeopardize” the investigations.

At the time of the shooting, the Liberals government was about to announce the banning of hundreds of types of what they labelled “assault-style” firearms, which entered into force on May 31, 2020.

‘At No Time Did I Cross That Line’

Blair, who was the public safety minister at the time of the shooting, denied linking the Liberal government’s gun-control measures to the mass shooting, saying that he had a number of conversations and briefings from the RCMP and the RCMP Commissioner, but they didn’t talk about releasing information about the firearms involved.

“I know very clearly the line between government responsibility for governance and oversight of the RCMP and giving directions in any way,” he told reporters in a press conference on June 29.

In a June 21 statement, Lucki also denied any interference in the investigations into the mass shooting but didn’t directly dispute the claim that she asked for the information on firearms to be released.

On June 28, the MCC released additional documents on the investigation, including an email letter to Lucki from the Nova Scotia RCMP strategic communications director at the time, Lia Scanlan.

In her letter, dated April 14, 2021, Scanlan corroborated Campbell’s claims that Lucki had promised Blair and the PMO to release information about the guns used in the 2020 mass shooting.

“Eventually, you informed us of the pressures and conversation with Minister Blair, which we clearly understood was related to the upcoming passing of the gun legislation…and there it was,” Scanlan wrote.

She also touched on the April 28, 2020 teleconference between the RCMP H Division (Nova Scotia) and RCMP headquarters in Ottawa.

“The reason for the meeting was unclear, although I suspected it may have had to do with ‘guns,’ given I was asked if Darren [Campbell] could speak about the guns less than two hours before the press conference was scheduled to take place,” Scanlan wrote.

On June 29, Conservative public safety critic Raquel Dancho and a number of her parliamentary colleagues released a joint statement saying that the testimonies from the senior RCMP officials have indicated Lucki was under pressure that “came right from the top.”

“Canadians deserve answers. The Liberals must fully participate in this investigation without delays or games. We need to hear from all involved, right up to the Prime Minister’s Office. Anything less is a cover-up,” said the statement.

Lee Harding and Noé Chartier contributed to this report.