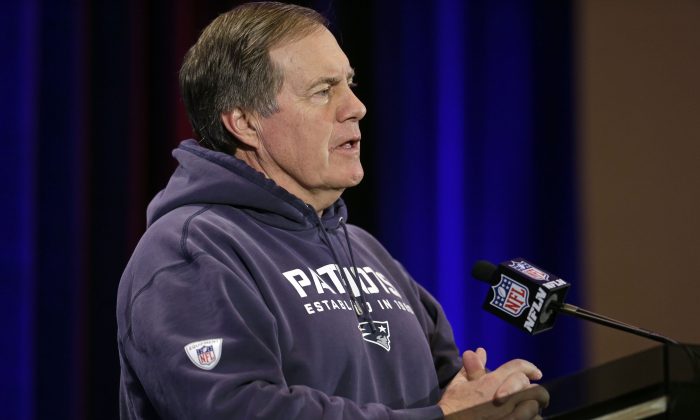 Much controversy has surrounded Deflate-Gate leading up to and through the investigation, NFL ruling, and now Federal ruling effectively nullifying the former.

However, the suspicions amongst the league, franchises, and players only continue to grow, leading head coach Bill Belichick to come to the defense of his team and franchise, even to the degree of defending the legitimacy behind the Patriots Superbowl wins under his tenure.

“Writing about warm drinks and trash cans and stuff like that. I mean it’s just, I think it’s a sad commentary and it’s really a very, it’s gone to a pretty low level. It’s sunk pretty deep. First of all I would say that our program here is built on competition and trying to improve every day and trying to work hard. And it’s not built on excuses. And we just try to go to work and improve and find a way to get better.”

Belichick, who has been silent for the most part, amid the continued allegations levied towards the Patriots, was heated and sounded off to the press corps on Friday, after Steelers Coach, Mike Tomlin’s post-game loss comments that headset problems are. “always the case” at Gillette Stadium.

During the Steelers/Patriots seasoning opening matchup at the Gillete Stadium, the home field of the Patriots, headset issues plagued the coaching staff of both teams. However, Coach Tomlin’s comments and post-game report by Bob Labriola on the Steelers website specifically indicate a heightened suspicion with the “headset issues”.

“This is the kind of stuff that happens to the visiting team in Gillette Stadium all the time. From the start of the game through the opening 14 minutes of the first quarter, the Steelers’ coaches’ headsets were receiving the Patriots Radio Network broadcast of the game. The broadcast was so loud that the Steelers coaches were unable to communicate, and the NFL rule is that if one team’s headsets are not working the other team is supposed to be forced to take their headsets off. It’s what the NFL calls the Equity Rule. Strangely enough, whenever an NFL representative proceeded to the New England sideline to shut down their headsets, the Steelers headsets cleared. Then as the representative walked away from the New England sideline, the Steelers’ headsets again started to receive the Patriots game broadcast.

The NFL is current looking into the issues which arose during Thursday night’s football game.

The increasing level of suspicion towards the Patriots organization has begun to bleed into past Superbowl title wins, including those from the early 2000’s.

Belichick commended the strength of skill and ability of the players from those years.

“This organization has won a lot of games, but particularly in reference to the great teams from ’01, ’03, ’04, back in there and all the great players that played that played on those teams: Ty Law, [Lawyer] Milloy, Otis Smith, Rodney Harrison, [Tedy] Bruschi, [Larry] Izzo, [Willie] McGinest, [Mike] Vrabel. [Anthony] Pleasant, [Richard] Seymour, Matt Light, [Joe] Andruzzi, Steve Neal, [Deion] Branch, Troy Brown, [Tom] Brady, Antowain Smith, Kevin Faulk, Corey Dillon, Lonie Paxton, [Adam] Vinatieri. To take away from what those guys accomplished, what those teams accomplished. How good they were. How many great players we had. How well they played in big games. How they consistently showed up and made big plays and game winning plays. It’s not right.”