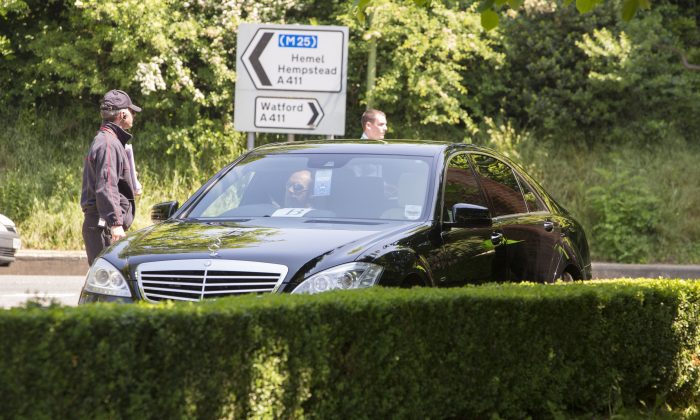 Restricted access for the press at the clandestine Bilderberg gathering 2013 at The Grove Hotel in Watford. They have constructed a wall around the venue and kept the press about a mile away. (Si Gross/Ben Dome )
12- OBSOLETE

LONDON–The 5-star Grove Hotel in the leafy London suburb of Watford is hosting a secret gathering of the some of the most powerful people in the world – the Bilderberg Group.

This year’s attendees, according to the official Bilderberg website, include directors from global banks Goldman Sachs and HSBC, and the directors of Facebook and Google. British prime minister David Cameron admitted he will be attending on Friday.

What goes on behind the closed doors has been hidden for the last 59 years. Even the existence of the group was known to few people, with media shying away from covering it, much to the frustration of those who have protested and monitored the group over the years.

But this year, something changed, as for the first time reporters and TV crews mingled with protestors and MEPs on the patch of grass marked off by a police cordon on Thursday.

Comedy writer Charlie Skelton has been monitoring the Bilderberg group for years. “I used to come because nobody else did. So it looks like I’m out of a job,” he said. “There’s a large press battalion of press – Sky News, Channel 4 News, The Times… you name it. What you see now is historic, it really is.”

The Bilderberg Group website says it is a forum for informal, off-the-record discussions about megatrends and the major issues facing the world. “Thanks to the private nature of the conference, the participants are not bound by the conventions of office or by pre-agreed positions. As such, they can take time to listen, reflect and gather insights,” says a statement. “There is no detailed agenda, no resolutions are proposed, no votes are taken, and no policy statements are issued.”

According to the website this year’s meeting includes the following topics: can the US and Europe grow faster and create jobs?; how big data is changing almost everything; nationalism and populism; cyber warfare and the proliferation of asymmetric threats; politics of the European Union; developments in the Middle East; current affairs.

MEP Gerard Batten, one of the MPs who had come to see for themselves what the conference was about said: “They have a website, they say that it is just a discussion, and there are no conclusions. I’d like to see a list of their decisions and action points – they say they don’t arrive at any.”

“My biggest question is why the media haven’t reported on all this in the last 59 years to any degree, and why it’s all been kept secret. That’s the biggest mystery of all.”

“If a couple of well-known people meet for a coffee, it’s front page news in the British media, and yet you get 130 of the best known people in the world turning up and no one’s interested.”

“Really there should be a media frenzy, that’s what you’d expect. This is a major breakthrough today.”

Some protesters, like Massimiliano Bonavoglia from Italy, have travelled a long way to the 4-day event in Watford.

“If they don’t have anything to cover up, why are they doing something like this, not in front of the people? The Politicians go in dark cars, they are hidden, and they don’t want to say what is going on after the meeting.” said Bonavoglia.

“After every Bilderberg group, we see some changes in international political settlement.”

“I’ve come to meet people, to see what’s going on over there [in the hotel], to write something about it, and to meet people who are not happy about this situation, it is important to have common rights, to communicate these things to other people.”

The objections to Bilderberg range from the milder pleas for transparency to accusations of large-scale manipulation of global events.

Alternative media broadcaster and conspiracy theorist Alex Jones told reporters: “We’ve had a huge victory in the fact that they tried to deny that this thing exists, and now we’ve forced it into hundreds of newspapers.”

Jones says that the group operates as a “shadow government above the government, a shadow world government.”

“Not everyone who comes to Bilderberg are scoundrels and villians. But there are villains in there.” He says the biggest issue is the fact that they are in with the regulators.

He said that the security measures ensured that they couldn’t identify the attendees as they entered the hotel. “They have basically have corralled us in here nicely, so that we don’t actually get any photos of people who are going to be attending.”

The hotel is surrounded by a steel walls which rings the hotel from half a mile away, quickly dubbed ‘The Great Wall of Watford’.

Campaign Liaison Officer from Hertfordshire police Steve Lee said the wall wasn’t to stop people from protesting. “That is a measure to protect the people inside. Any high profile individuals are subject to a number of risks from various international organizations, and that is geared up to protect them.”

According to the police, the security will be ‘cost neutral’ to the taxpayer. “How that funding breaks down is something I don’t have any knowledge on,” said Lee.