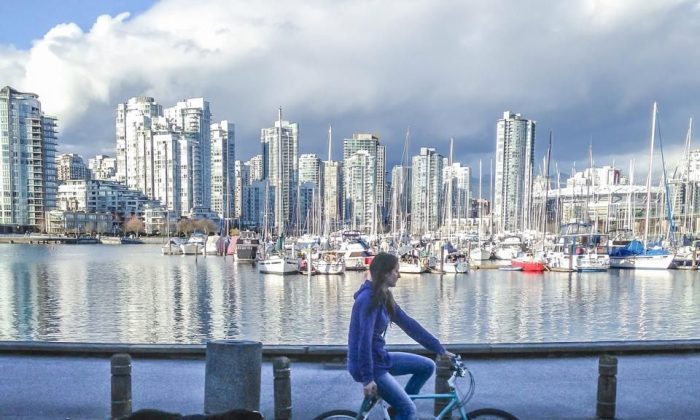 A cyclist takes her dog for a run along Vancouver's seawall. With the kickoff of Bike to Work Week on May 26, Bike Day goes nationwide in an effort to advance Canada's bike culture. (Courtesy Vancouver Cycle Chic)
Canada

As Canada heads into its most bike-friendly season, a raft of activities are in the works for Bike to Work Week, Bike Month, and the first national Bike Day—all kicking off on May 26.

There’s no denying the popularity of cycling. Last year, almost 20,000 people participated in Bike to Work week, and the numbers are expected to be higher for 2014. This year Bike Day, which was annually held on Parliament Hill only, is now expanding to cities across the country.

But Arne Elias, chair of Canada Bikes, which organizes Bike Day, says Canadian cities still have a long way to go to establish adequate infrastructure, training programs, and education on how to navigate urban environments safely and enjoyably by bicycle.

In short, Canada needs to improve its cycling culture in order to get more people on two wheels regularly, he says.

Elias hopes Bike Day will unify cycling enthusiasts across the country and bring about a cultural shift toward biking—one that sees the bicycle as integral to a more sustainable and people-friendly transportation future.

“What we’re trying to do is connect the local cycling groups to a sort of national unity approach to cycling,” says Elias. “From age 8 to 80, we want everybody to be able to use bicycles.”

The benefits of cycling are hard to dispute. On an individual level it contributes to mental and physical health and wellness and offers an extremely affordable alternative to cars. The public benefits are also high—less traffic congestion, healthcare savings due to a healthier population, lower infrastructure costs than for cars, and easier on the environment.

As Elias says, it’s a “win-win-win” package. But according to Statistics Canada, only about two percent of Canadians commute to work by bike.

Victoria has the highest share of bicycle commuters in Canada—hovering around 6 percent due to a strong cycling culture that includes public advocacy, pro-cycling events, great bike stores, convenient bike racks, and well-established biking paths. The mild winters would also be a factor.

Ideally about 40 percent of all urban transportation could be undertaken by bike, says Elias, which would bring Canada in line with many European countries where cycling has been integrated into city planning for decades.

But there are obstacles to overcome in moving biking culture forward—both physical (i.e. better infrastructure) and psychological (i.e. city street intimidation), he notes.

“A majority of Canadians bike and would like to bike more if they were given safe, convenient infrastructure for both commuting and recreation or tourism.”

Cities are taking notice of this unmet potential, and urban centres such as Montreal and Vancouver have made great strides toward creating bike-friendly streets with initiatives such as bike lane expansion and bike-share systems.

According to Vancouver City Hall, bike trips have increased by 40 percent between 2008 and 2011 alone, and are up by 180 percent over the past 15 years. The city has credited this largely with its investment in separate bike lanes, making cycling along busy city streets less harrowing.

David Phu, founder of Vancouver Cycle Chic, believes establishing a more casual and accessible cycling culture in Canada is the key to getting more people riding.

The organization, part of “Cycle Chic Republic” blogs around the world, began as a photo blog that documented stylish people on bikes. Seeing the need for a stronger bike culture, Vancouver Cycle Chic evolved into an advocacy group that promotes casual riding in fashionable garb, offering an alternative to the intimidating image of spandex-clad sport bikers.

“We have a hunch that, although Gore-Tex is great for commuting in the rain, there’s more to cycling in our city,” says the group’s website. “Getting on a bike can also be super casual, fun, and social. You don’t need to be a ‘cyclist’ to do it. Just hop on and go.”

European cities with well-established cycling culture like Copenhagen and Berlin are an inspiration for the group. In these cities, biking is an ingrained part of the culture, with streets awash with bikers from every demographic—from trendy teens to business professionals, children, and seniors.

Elias also points to countries like Sweden and Finland as examples of strong biking culture in cold climates—an oft-cited reason Canadians give for neglecting their bikes.

“It’s part of that programming question—how do you dress for cycling? What special equipment would you need? The infrastructure must be ploughed and kept clear just as much as they do a highway,” he says.

“When you get all of those things in place, winter cycling becomes entirely possible.”

Another step to creating a positive biking culture is to dial down the “drivers vs. cyclists” narrative often emphasized in the media and normalize the idea of cyclists sharing the roads, Elias adds.

“We’re all people, we’re all Canadians, and we should be able to use any mode of transportation in the right circumstances,” he says.

“As we make the infrastructure safer and more convenient and accessible, then we’ll see a lot more Canadians [on bikes].”