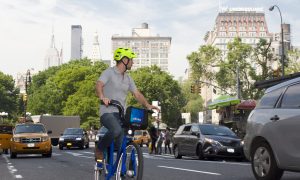 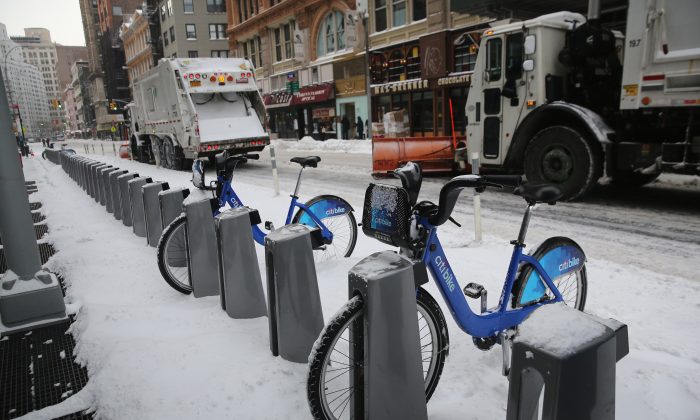 NEW YORK—As the weather got colder this winter, more New Yorkers set aside their Citi Bikes. On Jan. 3, the day after a howling overnight snowstorm, the city’s bike share system logged the fewest number of trips for a 24-hour period since launching in May last year, according to data posted on its website.

Riders checked out the blue bicycles a record-low 1,230 times across the city, compared to an average of over 30,000 times per day during the summer.

Snow was not the only cause for the record low reached on Jan. 3. The number of daily bike share rides has declined steadily as average temperatures have dropped. Citi Bike users rode the bikes four times less in January compared to the system’s record month of September.

Howard Bowler, 60, rode a Citi Bike on both of the coldest days this year—Jan. 3 and Jan. 7 based on daily average temperature data from a Central Park reading of the National Climatic Data Center.

“Doesn’t stop me,” Bowler said. “If you really bundle up you can do it. Just get something for your head and your neck.”

John O. rides a Citi Bike from 34th Street down 9th Avenue to Chelsea Market for work every day. He also braved the cold on Jan. 3 and Jan. 7.

“The only days I might not ride is if it’s raining really hard,” John O., who preferred not to disclose his last name, said. “But even if it’s raining I’ll ride. If it’s a drizzle it doesn’t bother me.”

Alex Lyras, 40, said that since fewer people are using the bike share the station he wanted to dock his bike in on West 29th Street was full. “I had to ride to another location,” Lyras, a Los Angeles resident, said on a comfortably warm Jan. 15.

James Carter, who tows Citi Bikes to rebalance stations, was surprised to hear the number of riders dropped so low with the weather.

“People who bike in the winter tend to be heartier folk,” Carter said. “The bikes are heavy enough to use in the snow. They are like tanks.”

The number of passes and memberships purchased for the bike share also cooled off with the weather, according to public data on the Citi Bike website. Only one 7-day pass and one 24-hour pass were purchased on Jan. 3, the day after the snowstorm.

The bike share is financed in part by revenue from membership and pass sales. The sales have reduced sharply with the temperature. Average daily sales revenue plummeted to roughly $4,000 systemwide in January from $250,000 in daily revenues during the summer months.

Former Mayor Michael Bloomberg said that the system would one day be profitable. Once it is, the profits are to be shared with the city. The bike share has generated more than $30 million in revenue since its launch, according to public data on its website.

The seasonal drop is likely to make a financial dent for the Alta Bicycle Share. Bloomberg said in October that Alta was still losing money due to the costs of rolling out the system.

The mayor’s office and NYC Bike Share did not return requests for bike share’s financial data.