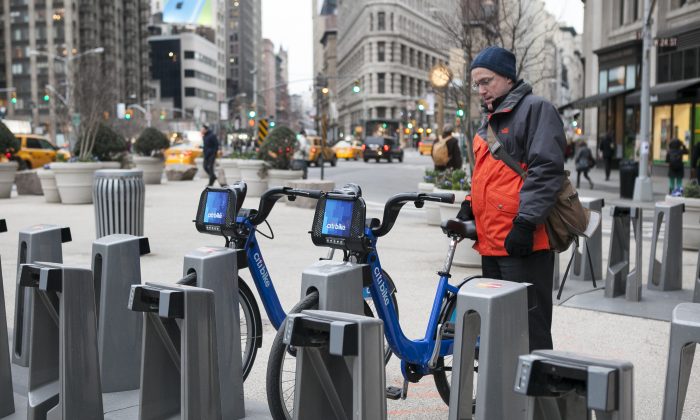 Bike sharing has boomed in Europe and North America in recent years following decades of slow growth since its introduction on the streets of Amsterdam in 1965.

Like any industry undergoing rapid expansion, it is experiencing growing pains. Specifically, it’s the confusing pricing structure that has recently taken the heat.

The pricing system, dubbed the “buffet model,” allows riders to take as many bike trips as they want for a flat initial fee for a designated period of time, as long as each trek does not exceed 30 minutes in length (the time limit can vary from city to city). Trips that last longer than the limit accrue overage fees at rates ranging from $1 to $7 per half hour.

Dependence on Casual Users and Overages

The model, first implemented by Velo’v in Lyon, France, in 2005, was designed to encourage the short-term use of bicycles, according to the Bike sharing Blog. While it has been relatively effective at keeping trips short, it has also created confusion among users and difficulties for operators.

In North America, casual users who purchase a 24-hour pass often believe they are free to use the shared bicycle as much as they want for the entire period. As a result, many have racked up overages that can total more than $100 per day.

This, coupled with the proportionally low revenue generated by annual users, has made bike sharing operators increasingly dependent on casual users to remain financially viable. Annual members, who typically make up a majority of the riders, pay a commensurately lower rate per trip and incur fewer overages per user, and thereby generate considerably less revenue than casual users.

Research by the University of California, Berkeley’s Transportation Sustainability Research Center (TSRC) has found that while casual users normally account for less than half of a system’s total use, they can bring in as much as 67 percent of a bike sharing system’s revenue.

The percent of revenue coming specifically from overages remains unclear for most programs, but studies suggest this revenue is largely a result of consumer confusion. TSRC recently surveyed casual users of the Bay Area Bike Share program in San Francisco and found that at least 53 percent did not understand the pricing structure. The overwhelming majority, in fact, believed that they were paying less than what they were being charged.

The New York Post recently reported that Citi Bike has accrued $4 million in revenue from such overages since the program’s inception in May 2013. On the other hand, the Post did not report how much those overages actually cost the operator, such as staff time spent fielding customer calls and processing reimbursement. The paper also did not tally any losses resulting from dissatisfied customers whose negative experience would discourage them from renting again.

These problems have led some cities to explore alternative pricing models that are more intuitive and could potentially relieve casual users from paying some of the additional fees.

While some programs have secured public funding or major system sponsors to facilitate equitable growth and maintain financial stability, DecoBike in Miami Beach managed to secure private funding and has operated an economically sustainable bike sharing program since 2011. Its pricing structure requires that casual users purchase a finite pool of bike usage time—30 minutes, 1 hour, 2 hours, and so on. This time can be used all at once or spread out over multiple trips.

Similarly, programs featuring Social Bicycles equipment in Hamilton, Ontario, and Buffalo, N.Y., are also offering users, both annual and casual, finite pools of daily riding time. This pricing structure will probably be implemented in Orlando, Tampa, Phoenix, and Atlanta, which are all expected to feature Social Bicycles’ equipment.

These pricing structures are more intuitive for first-time users but lead to other challenges for operators and cities. In some cases, they encourage riders to use bikes for longer durations (for instance, one hour or more), decreasing the turnover rate and limiting the total number available at any given moment.

They also cause the system to function more as an automated bike rental system than a way to navigate between destinations and transportation modes. This may deviate from what the city or local government initially intended when launching its bike sharing program. Furthermore, this pricing model may also infringe upon established bike rental companies, which rely on tourists who tend to rent bikes for extended trips.

Another alternative would be to include a pay-per-trip option, similar to how buses and subways operate. For example, a user could purchase a one-way bike sharing pass for $1 or $2. Rather than replacing the dominant buffet model, this idea could simply augment it to capture a larger number of users.

It would also likely strengthen bike sharing’s role as a mode of public transport and a first/last mile solution, seamlessly integrating it into the system through a joint fare card or smartphone access point. While this option has been proposed in cities like Chicago, and it has been discussed by Paul DeMaio and others, Broward B-cycle is the only operator that we are aware of that offers a pay-per-trip option in North America.

As for the buffet model, it is important to note that its problems may disappear as people get used to the structure. In the TSRC survey of Bay Area Bike Share casual users, 100 percent of those who had previously used a bike sharing system understood the pricing structure.

But with so many casual users presumably being first- or one-time users, does it make good business sense to operate with a pricing structure that at least half the customers may not understand? Perhaps the solution will come in the way of altering how the information is being displayed, which has recently been done by several programs, including Citi Bike and Hubway.

However, as companies like Social Bicycles launch programs with a different approach, the future of the buffet model remains questionable, and bike sharing’s pricing structure will likely evolve to become standardized as the industry continues to grow and mature.