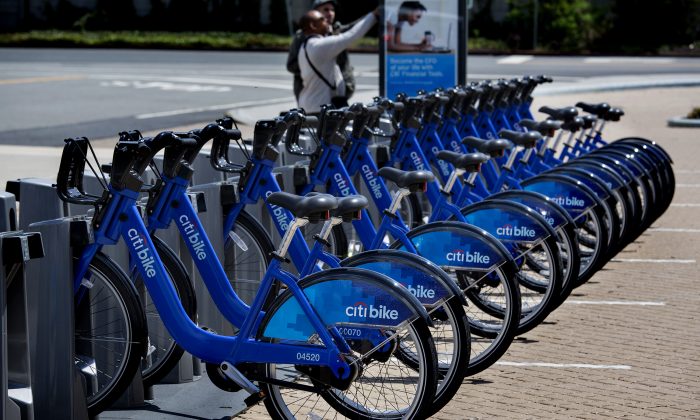 Bicycles, part of the NYC Bike Share program, are lined up at a dock and lock station at the Brooklyn Navy Yards Sunday, May 12, 2013 in New York. The expanding bike share system allows those who join to ride bicycles and return them from the same or different docks in parts of New York. (AP Photo/Craig Ruttle)
New York

NEW YORK—The New York City bike share program is days away from fully launching. As of Friday morning, more than 850 Citi Bike bicycles were already docked in the grey stations that have been assembled in Manhattan and Brooklyn in past weeks.

When the system begins on Monday, May 27, only those who signed up for bike share memberships can use the large, blue bikes. From June 2, the credit card system will be enabled so anyone can use it.

“It’s a big system, so we’re turning it on gradually,” said John Orcutt, Director of Transportation for the NYC Dept. of Transportation. Orcutt was out on Friday checking the status of the bikes as they were being installed in the racks. “We’re not trying to go from zero to sixty on day one.”

Bikes started to be put out at night, and the first wave was on Thursday night. Going forward they will be put out during the day and night until Monday, when all 6,000 bikes will be put in place.

Some of the stations have been placed and then relocated, but Orcutt said the changes haven’t been major. Some stations haven’t been put in yet because of construction in some areas, and there were originally 7,000 bikes but some of them got damaged in Hurricane Sandy. Those bikes were meant to be placed in Williamsburg and Greenpoint.

DOT says on its website that it continue to “refine these station locations” and that site selection and planning work for Park Slope, Cobble Hill, Prospect Heights, Crown Heights, the Upper West and East Sides, and Sunnyside are ongoing.

As for concerns about rider, pedestrian, and vehicle safety, the bikes include a short list of pointers in between the handle bars, including a warning to yield to pedestrians and stay off the sidewalk.

“The main thing is just to be super-alert at all times,” said Orcutt. He added that DOT is confident that people will basically be safe.

“Our bike counts have more than doubled since 2007 and the number of injuries has not gone up at all,” said Orcutt. “Generally we find around the world that the more bicycles are on the streets, the safer it is because motorists are habituated to it—and pedestrians, too.”