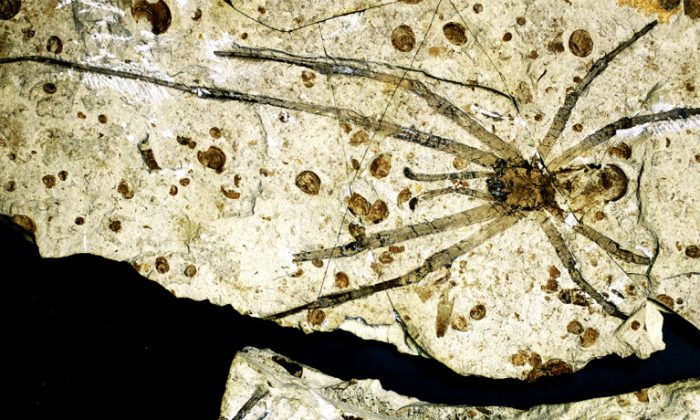 The biggest fossiziled spider ever discovered was recently unearthed in China.

Village farmers in the 21st century began digging in the area of Daohugou, China, and scientists have examined hundreds of the collected specimens. Some of them are insects, or other animals.

“Village farmers dig pits to extract the fossils, which are mainly insects and the occasional spider or other animal, and experts from the university in Beijing travel there, usually during the New Year holiday, and sort through the finds,” Paul Selden, a professor at the Department of Geology at the University said in the announcement. He collaborated with professor Dong Ren of Capital Normal University.

Now, one of the fossilized spiders has been deemed the largest ever found.

Its body length is 1.65 centimeters and the length of the longest leg is 5.82 centimeters.

“It’s unique because it’s intermediate between the more primitive kinds of the araneomorph, or ‘true’ spiders, and the well-known orbweavers that we see around us commonly today,” Seldon said. “While it’s the largest known fossil spider, it’s not the largest spider, which is a Brazilian tarantula.”

The spider is believed to have been male. A female version was found a short time ago in the same area.

Scientists believe that so many fossilized animals are found in Daohugou because of the volcanic ash beds there.

Seldon said that discoveries in the area, including this one, points to the insect life in the area during the Middle Jurassic being preyed on by large, web-dwelling spiders.