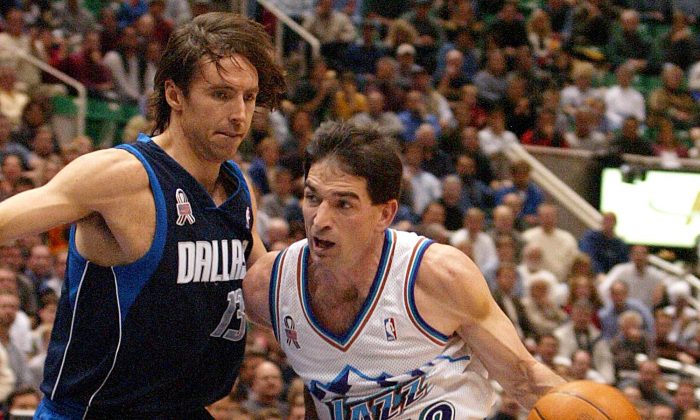 John Stockton (R) of the Utah Jazz drives to the basket past Steve Nash (L) of the Dallas Mavericks during the second quarter in Salt Lake City, Utah, 10 December, 2001. (George Frey/AFP/Getty Images)
NBA

Sports drafts are a crapshoot—this is well-known throughout sports leagues everywhere. Correctly predicting a players’ future value takes a lot of study, a keen eye for talent, and plenty of luck.

Not all execs have that winning combination either. That’s how players like Michael Olowokandi are taken first overall.

But some do and because of it, they’re able to keep their franchises ahead of the curve.

But what are the biggest draft steals of all time? Here are the best 10 since the playoffs last expanded in 1984:

10. Rajon Rondo, 21st overall in 2006—Rondo, who has led the league in assists per game each of the past two seasons, wasn’t originally part of Boston’s “Big Three” but soon had people calling them the “Big Four” after a number of memorable playoff performances. In addition to the ring he has with Boston, Rondo has been an All-Star four times and has a pair of inclusions on the All-Defensive team.

9. Marc Gasol, 48th overall in 2007—Gasol has come a long way from being the afterthought in what was once considered one of the more lopsided trades in NBA history—the 2008 deal that sent brother Pau to the Lakers, who went on to win two of the next three titles. The 28-year-old center was named Defensive Player of the Year this past season as well as an inclusion on the All-NBA second-team.

8. Dennis Rodman, 27th overall in 1986—Maybe the greatest defensive forward of all-time, Rodman twice won the Defensive Player of the Year, was named to the All-Defensive first-team seven times, and led the league in rebounding seven straight seasons for three different teams. Oh, and he also won five rings for two different teams.

7. Manu Ginobili, 57th overall in 1999—Ginobili, who’s from Argentina, didn’t actually come into the league until 2003, but made an immediate impact, helping the Spurs to the first of three titles in a five-year span that season. An afterthought in the ’99 draft, Ginobili, won sixth-man of the year in 2008 and without him Tim Duncan does not have four rings.

6. Joe Dumars, 18th overall in 1985—Dumars won a pair of titles with the Pistons and was named Finals MVP in ’89. A great defensive shooting guard, Dumars was named to the All-Defensive first-team four times. His selection, along with Rodman’s the next year, catapulted Detroit into title contenders through the early ’90s. As an aside, Dumars has the distinction, as an executive for the Pistons in 2003, of drafting Darko Milicic over Dwyane Wade, Chris Bosh, and Carmelo Anthony, yet still assembling a good enough team to win a title the following season.

5. Tony Parker, 28th overall in 2001—Parker’s stock keeps on rising. Once mentioned as trade bait when the Spurs were courting Jason Kidd in 2003, Parker now has three rings to his credit, a finals MVP award, and back-to-back spots on the All-NBA second team the past two seasons. The Spurs theft of him and Ginobili set the franchise for the next decade.

4. Steve Nash, 15th overall in 1996—Nash, with a pair of MVP awards in ’05 and ’06 and, in addition, is the lowest-drafted player ever to win the league’s highest individual award—and 1 of 12 to win it twice. Not really known for his defense, Nash was a perfect fit for Mike D’Antoni’s high-octane offense that made the Suns a force once upon a time. The 39-year-old is now currently fourth all-time in assists.

3. Kobe Bryant, 13th overall in 1996—There is considerable debate over how much of a steal this really was, as rumors have Bryant wanting only to play for the Lakers. But what leverage did he have, coming directly out of high school? Having been already drafted he would be ineligible to change course and go to college, leaving only an undesirable option to go overseas. In any case, the Lakers got their man, who has won a pair of scoring titles, the 2008 MVP, 11 All-NBA first-team selections, and five rings.

2. Karl Malone, 13th overall in 1985—The toughest call on the list is Malone over Bryant. Malone won two MVPs (including one over Jordan) to Bryant’s one, but Kobe also has five rings to Malone’s zero. Yet Kobe didn’t win the titles by himself, needing Shaq for the first three and then Pau Gasol for the last two. Still Malone is second all-time in points scored and was a force into his late 30s.

1. John Stockton, 16th overall in 1984—Stockton gets the edge here over his longtime teammate Karl Malone, having been picked three spots later a year earlier, while both can make a case as being the all-time best at their respective positions. The longtime point guard Stockton, the NBA’s all-time leader in assists and steals, was a 10-time All-Star and led the league in assists per game nine straight seasons. Utah’s selections of Stockton and Malone in consecutive drafts, put the team into the playoffs 20 straight season from ’84 through ’03—the duo’s final year together.