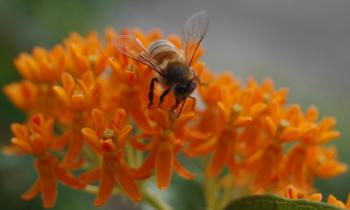 Despite their small brains, honeybees can count, categorize similar objects, and differentiate between shapes that are symmetrical and asymmetrical. (The Epoch Times)
Science

However, biologists have suggested that insects, despite their small brain sizes, can be as intelligent as much larger animals.

“We know that body size is the single best way to predict an animal's brain size,” said Lars Chittka, a professor at the University of London, in a review paper published in Current Biology. “However, contrary to popular belief, we can't say that brain size predicts their capacity for intelligent behavior. Animals with bigger brains are not necessarily more intelligent.”

Past research has shown that insects are capable of clever behaviors that scientists previously thought were exclusive to larger animals. For example, honeybees can count, categorize similar objects, and differentiate between shapes that are symmetrical and asymmetrical.

Research has suggested that bigger animals may need bigger brains only because the brains need to control more. For instance, they need bigger nerves to move bigger muscles. The size increase allows the brain to function in greater detail, with finer resolution, higher sensitivity, or greater precision.

“In bigger brains we often don't find more complexity, just an endless repetition of the same neural circuits over and over. This might add detail to remembered images or sounds, but not add any degree of complexity. To use a computer analogy, bigger brains might in many cases be bigger hard drives, not necessarily better processors," said Chittka.