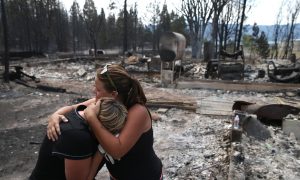 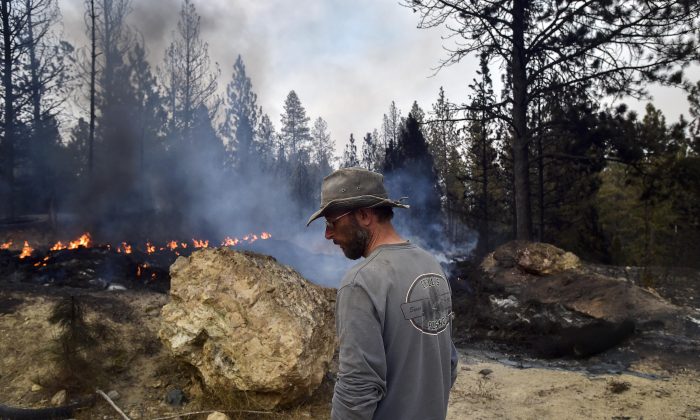 Lorne Brunson stands near the remains of his home, which was lost to a wildfire on Saturday near Coyote Canyon, Sunday, Aug 16, 2015, in Fruitland, Wash. Department of Natural Resources spokeswoman Janet Pierce says most of the state is under a red-flag warning as windy and hot conditions made areas tinder-dry. (Tyler Tjomsland/The Spokesman-Review via AP)
US

SPOKANE, Wash.—Big wildfires threatened the Lake Chelan resort region of central Washington on Monday after driving away tourists, destroying a warehouse filled with nearly 2 million pounds of apples and forcing thousands of residents to flee.

The several large fires burning near the town of Chelan have scorched more than 155 square miles and destroyed an estimated 75 homes and businesses Friday and Saturday, officials said. Scores of homes remain threatened, and mandatory evacuation orders remained in effect for more than 2,900 people in the Chelan area.

The Chelan fires were just some of the many destructive blazes burning throughout the Northwest. In northern Idaho, more than 40 homes were lost near the town of Kamiah, and in Oregon a lightning-sparked blaze on the Malheur National Forest has grown to more than 60 square miles and has destroyed at least 26 homes.

So many fires are burning across the West that the National Interagency Fire Center announced Monday that 200 active-duty military troops were being called in to help. They will be sent to a fire on Aug. 23.

A wildfire on California’s Central Coast saw new life Monday as winds pushed it across containment lines, forcing several hundred people from their homes, state fire officials said. The wildfire burning north of San Luis Obispo was one of the few blazes in the state that was growing amid a cooling trend expected to continue.

The blazes near Chelan, about 180 miles east of Seattle, are burning through grass, brush and timber, fire spokeswoman Janet Pearce said. The uncontained fires were being battled by more than 900 firefighters, she said.

“Today our focus is on structure protection,” she said Monday.

The flames come in the midst of the summer tourist season in the scenic town located along Lake Chelan in the Cascade Range.

But lots of tourists left Chelan after the fires broke out on Friday, said Mike Steele, director of the Lake Chelan Chamber of Commerce. It’s too early to determine the economic impact, but Steele said it would be significant.

“We’re working hard to get our feet back on the ground,” Steele said, noting that many of the people who would serve tourists have either had to leave or lost homes.

The fires also threaten apple orchards and packing warehouses in the heart of the state’s apple belt during what has been a summer of drought in the Northwest.

Chelan Fruit lost one of its major fruit-packing warehouses in Chelan to wildfire on Friday. The warehouse contained 1.8 million pounds of apples and employed about 800 people, said Mac Riggan, director of marketing for the company.

The employees are being sent to Chelan Fruit’s other facilities in the region, Riggan said. “Our other plant in Chelan is fully operational,” he said.

Washington is by far the nation’s largest apple producer, and the industry produced more than 140 million cartons of apples last year, of which perhaps 6 million remain in warehouses, Riggan said.

Washington farmers grossed about $2 billion from the apple crop last year, and late-season apples tend to sell at a discount as buyers are waiting for new fruit, he said.

The air was clouded with smoke in Spokane, about 150 miles east of the Chelan fire, on Monday. Air quality was expected to remain in the “unhealthy for sensitive groups” range for at least the next couple of days because of the Chelan fire and other fires, according to the Spokane Regional Health District, which serves the metropolitan area of nearly 500,000 people.

“Smoke from wildfires is especially harmful for those with health conditions like asthma. We recommend that people who are sensitive to poor air quality limit their time outdoors,” said Dr. Joel McCullough, the local health officer.

Meanwhile, the Washington National Guard joined the firefighting efforts in the state after a request for assistance from the state Department of Natural Resources.

“We’ve been expecting another devastating wildfire season, and have had our personnel and equipment ready so we can get them out the door the moment we’re asked for help,” said Maj. Gen. Bret Daugherty, commander of the Washington National Guard.

In northern Idaho on Monday, more than 700 firefighters along with 40 fire engines and four helicopters were trying to protect homes from flames. But residents along an 11-mile section of U.S. Highway 12 were told to be ready to flee.

On the Idaho-Oregon border, about 800 firefighters had a 443-square-mile wildfire 90 percent contained. The week-old fire has scorched grassland needed for cattle and primary habitat for sage grouse, a bird under consideration for federal protections.

Better weather helped firefighters battling wildfires in eastern Oregon. Though the fires are far from contained, higher humidity and lighter winds slowed the spread of the flames Sunday.