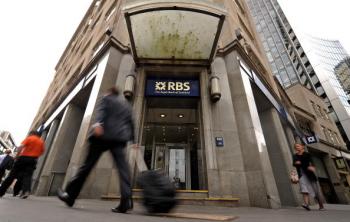 People walk past a branch of the Royal Bank of Scotland (RBS), in the City of London on August 4, 2010. (Ben Stansall/Getty Images)
Business & Economy

Damian Robin
View profile
Follow
biggersmaller
Print
For the first time since the international bailouts of three years ago, all four of the U.K.’s biggest banks have announced profits.

Barclays, HSBC, Lloyds TSB, and Royal Bank of Scotland (RBS) have collectively amassed some $12.7 billion for the first half of 2010. Lloyds TSB, as well as RBS and NatWest, and the smaller bank Northern Rock, had injections of government cash during the credit crunch.

The main reason for the banks’ upturn is their ability to borrow from the Bank of England at a very low interest rate (just 0.5 percent) and at the same time to lend to mortgage customers at a relatively high rate (4.5 or 5.0 percent), which gives a high profit margin.

With the announcement of a return to profit comes the thorny question of what happens to these profits amid continuing animosity toward bankers and their massive bonuses.

In an interview with the Sunday Telegraph, the minister in charge of finance, Chancellor George Osborne, said that banks should pay businesses not bonuses and that they have an “economic obligation to loan to businesses.”

According to Siobhan Kennedy on the Channel 4 News program, HSBC lent $2.22 billion to small and medium businesses this year but, accounting for money paid back, net lending actually fell by 2 percent.

According to the July Economy Watch survey of the Forum of Private Business (FPB), small businesses will soon need more cash.

"The need for finance is only going to increase as the economy grows and as small firms, which must be the catalyst for sustained economic recovery, try to meet renewed demand," Matthew Goodman, the Forum's head of policy said in a press release.

Steven Green, chairman of British Bankers’ Association (BBA), wrote in their 2009/10 annual report, “Last year I wrote that re-establishing confidence and trust in the banking sector would be a journey up a steep mountain. One year on, we have collectively begun that journey.”

Green is also chairman of HSBC, which would not let Channel 4 cameras into the press conference where Green announced the bank’s half-year profit. HSBC also declined to appear on Channel 4 News to answer questions about their high yields and lack of lending.