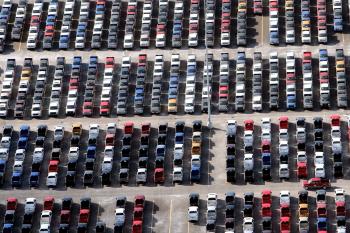 Numerous 2009 Ford F-150 trucks are parked in a lot before being shipped on November 21, 2008 in Detroit, Michigan. (Spencer Platt/Getty Images)
Opinion

The Gordian Knot of the Big Three Automakers

Manny Drukier
biggersmaller
Print
Last week’s hearings before the United States Congress did not address the real issues facing GM, Ford and Chrysler. There’s no question that bankruptcy in the auto industry would exact a heavy toll on the fragile U.S. economy. The Big Three must go on—but how?

If they’re given a $25 or $50 million bailout, they’d simply produce one billion more cars to add to the unsold inventory already on the dealers’ lots. If dealers can’t finance additional inventory, the cars will linger on the manufacturers’ back lots.

Trucks, the traditional cash cows of the American auto industry, are not selling at all due to the collapse of the residential, and now the commercial, building markets.

A good portion of would-be new car owners can’t qualify for loans, nor can they get a lease these days for a brand new vehicle. Of course they’d love to hop into a new Malibu, but if they can’t make mortgage payments they’re not likely to take on a car lease.

The majority of Americans are hard working and honest, but facts are facts and times are tough. So then, should the Big Three keep producing just to add to the existing stock? To shut down is not a viable alternative either: orders for parts are in the pipeline—an unstoppable flood.

There’s no indication that management is willing to trim from the top. Larry, Moe and Curly of the Big Three flew down to Washington in their private jets, tin cups in hand. When asked if they’d sell their jet fleet to help the cash flow, they simply gripped their tin cups more firmly.

Cutting labor costs is equally difficult. The United Auto Workers (UAW) contract calls for near full pay if temporarily laid off, no getting around it. The UAW representative at the hearing said they would not give up any contact benefits.

Actually, no U.S. representative suggested anything of that nature. It would have taken an enormous cut in the auto workers’ pay—currently at about $70 per hour—to make a difference in the final cost of a Jeep Cherokee.

The real burden for the automakers is the 600,000 retiree pensions and health care costs, costs that go up 10 to 30 percent every year. People are living much longer too.

Meanwhile, assembly lines are making better and better cars—vehicles that can last 10 years or more. One way to get rid of unsold stock is to junk the pre-1990 aged fleet, but can the mom who drives carpool in a perfectly good 1988 family wagon afford a later model? Not likely.

Still a solution must be found. The total number of cars sold yearly in the United States in better times was about 15 million, including imports and U.S.-made BMW’s, Toyotas, etc.. Currently, sales figures hover at around 11 million vehicles. Plants are being shut down—Ford alone has closed 17 plants and counting. Furloughed workers receive hefty severance checks, and rightly so—one has given his or her entire youth to GM.

In the hearings it was discovered that the average severance check rings in at $105,000. It’s not hard to imagine that the men and women who volunteer to take the settlement are the most energetic, the ones who feel confident that they will find work elsewhere. Those who stay on are probably the least ambitious.

This situation presents another huge problem that neither management, the UAW nor Congress dared to address: an aging auto industry workforce. GM’s Chairman Rick Waganer admitted, scratching his head, that the average age of UAW members is 49. The UAW contract permits management to hire new, younger assembly line workers at much lower hourly wages—in 2010! Will they still be in business by 2010?

I am not suggesting that 49-year-olds are lazy or sloppy. But to have meaningful benchmarks of productivity, there must be a healthy mix of younger and older people manning the line.

I haven’t even broached the topic of the role played by pricing, brand names, models, and American-made versus imports. It is far too complicated.

I will mention dealerships, however. For carmakers, common wisdom might say: more dealers equals more cars sold and the more brand names the better. Not so. GM has eight brand names and several models under each brand—it definitely gums up production. Some factories are set up only to produce certain models. Why? Don’t ask.

Congress, Wall Street, shareholders, UAW and the public all want big changes—NOW. It’s not possible. Even with the best of intentions and all the money in the world, major transitions takes time. And mistakes will always be made.

As the adage goes, “We don’t know what we don’t know.” Only under wartime conditions can major structural change be accelerated. Otherwise, we plan and plod.

Congress wants the Big Three, when they return, to bring a “recovery” plan. Congress will not consider a loan unless they see a viable plan. The situation is grim.

There’s only one possible solution. It’s staring us in the face. The shareholders of GM, Ford and Chrysler are now holding penny stock. If they donate them all to UAW, taking a tax write off on the original cost, they’re no worse off. Then a mediator should step in and institute an orderly take-over of the three automakers by the UAW. The union appoints a lean management, they get their loan from Congress, and then go on to make their members rich.

Manny Drukier has been in business, from manufacturing to retail to real estate, and observing business for the past 60 years. He is an author of two books and resides in Toronto, Canada.