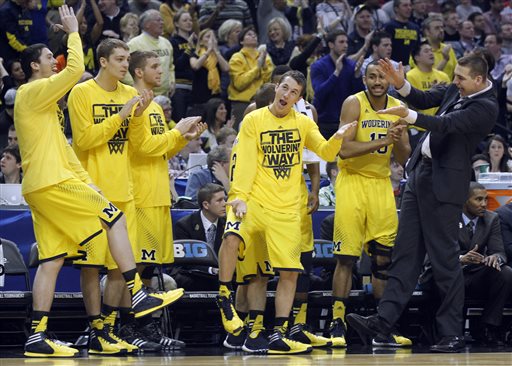 Michigan players dance around on the sideline as they react to a play in the second half of an NCAA college basketball game against Ohio State in the semifinals of the Big Ten Conference tournament Saturday, March 15, 2014, in Indianapolis. Michigan won 72-69. (AP Photo/Kiichiro Sato)
College Sports

The Big Ten tournament in 2014 will wrap up with the final game left on the bracket–Michigan vs Michigan State in the championship on Sunday.

The Spartans and Wolverines face off at Bankers Life Fieldhouse in Indianapolis with tip-off scheduled for 3:30 p.m.

The game will be broadcast on CBS and live streaming is available via CBS online.

Michigan took out Ohio State 72-69 in the tournament semifinals while Michigan State got by Wisconsin 83-75.

The Associated Press reports that the game will feature one of the few teams left contending for one of the few spots in the NCAA tournament. See the story below.

It’s not uncommon for the selection committee to have its bracket drawn up before all the games are over on Sunday. For that reason, and a few others, Michigan could very well have moved up to a No. 1 seed simply by making the Big Ten final.

The Wolverines beat Ohio State 72-69 in the semifinals and will face Michigan State in the last game before the NCAA releases its tournament pairings.

Michigan swept the regular-season series between the in-state rivals. But sure, it’s more than possible Tom Izzo’s team could spring an upset.

Shouldn’t matter. By moving Michigan to a 1 and Villanova — a one-point loser to Seton Hall in the quarterfinals of the Big East tournament — to a No. 2, the teams would presumably remain in the same bracket and be seeded to meet in the regional final.

Saturday’s action didn’t change much else on the ‘1’ line: Florida won and Wichita State hasn’t played since last Sunday. Arizona lost to UCLA in the Pac-12 championship but the Wildcats were No. 1 in the RPI, so their spot would appear secure.

Here’s a Pick Six of how Sunday’s conference finals could impact the brackets:

ACC, DUKE VS. VIRGINIA: Duke plays in its 31st conference title game. Virginia is in for the first time since 1994. That ACC title is the real prize here. The winner could end up with a No. 2 seed while the loser might fall to a 3 or 4. Unlikely Duke could move to top-seeding, though Arizona’s loss leaves a sliver of hope. Previous meeting: Duke 69, Virginia 65 at Cameron in January.

ATLANTIC-10, ST. JOE’S VS. VCU: Not so long ago, St. Joe’s was on the bubble. No longer. The A-10 could get up to six teams in the tournament. Biggest issue here might be whether the result somehow affects the conference’s last bubble team, Dayton.

BIG TEN, MICHIGAN ST VS. MICHIGAN: Michigan hadn’t made the conference final since 1998, and a look through the history books says the Wolverines didn’t even make it then. NCAA violations wiped the appearance off the books. Meanwhile, the Spartans have won consecutive games for the first time since late January. But who would bet against Izzo come March? Michigan State is 3-0 when it plays for the Big Ten title.

SEC, FLORIDA VS. KENTUCKY: If there’s any doubt as to whether Florida is the overall No. 1 seed (Wichita State is the other option), the Gators can put it to rest here. Billy Donovan’s team has won 25 straight. As is the case with the Big Ten, this game is late (3:15 p.m.), and the seeding decisions may already be locked in. That leaves Florida as 1 or 2 overall and Kentucky somewhere around a ‘6.’ Oh, an SEC banner always looks good in the rafters.

SUN BELT, GEORGIA ST VS. LOUISIANA-LAYFAYETTE: Winner-take-all with Georgia State the favorite to dance. Bulldogs’ two victories over Lafayette this season have been by single-digits, though.

AND WATCHING NERVOUSLY: Well, none of these Sunday results will really free up, or take up, an unexpected spot. But just for the sake of conversation, let’s say SMU (yes, that’s Larry Brown) and Tennessee — a couple of teams with good enough RPIs and resumes — are the most nervous teams on the bubble. The numbers say they should be in. But if either of these teams miss, it’s a sign the committee is using the “eye test” as much or more than the raw statistics. Waiting in the wings: Arkansas, Minnesota.