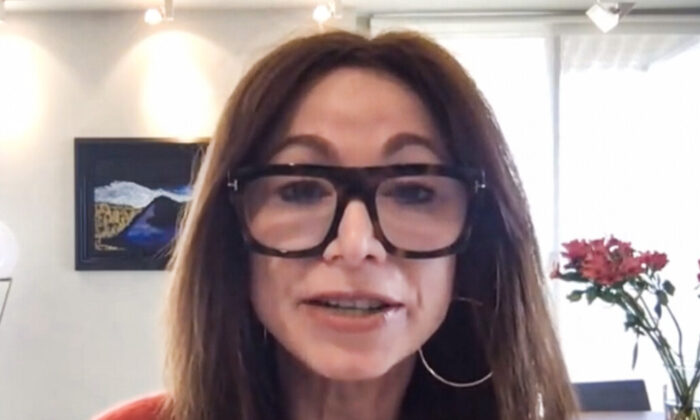 Jane Hoffman, author of the book “Your Data; Their Billions,” explores Big Tech’s murky practice of profiting by selling users’ personal data. Hoffman said besides cashing in on a person’s online activity, companies like Google and Facebook reinforce political behaviors that deepen divisions in society.

“You only see things that reinforce your current behavior. And politically, we may think of it as the splinternet rather than the internet, because people are being divided by their behavior and their online activities,” Hoffman said during a recent interview with NTD Capitol Report.

Dr. Robert Epstein, a senior research psychologist at the American Institute for Behavioral Research and Technology in California who has conducted rigorous studies of online manipulation, has also found that Big Tech is manipulating users and creating more political division.

Meanwhile, Hoffman said the average person, including teens, spends over 4 hours on their device each day but other statistics show a much more disturbing trend.

According to a Pew Research Center survey conducted from Jan. 25 to Feb. 8, 2021, 31 percent of adults reported being on an internet-connected device “almost constantly.” This all translates into more profits for Big Tech.

“Are we going to be just living in a Metaverse? Which is what Facebook would like, so that we’re communicating to each other online with these personas that we create,” said Hoffman.

According to MarketWatch Big Tech scored a “$1.4 trillion payday” during the pandemic. Amazon, Apple, Facebook, Google, and Microsoft increased their profits by 45 percent in 2021.

Hoffman, who is also a Senior Fellow at Harvard University and previously served as Commissioner of Consumer Affairs in New York City, said “All these companies are buying and selling your data. So it’s shared, but there’s a cost associated with it. So, because it’s your data, they’re making billions off of it. So there’s what’s called a data broker. So every time you’re doing something online, they’re buying that piece of information.”

She said if you buy a certain item, Big Tech will send you advertising for other related items which they know people buy along with the first item.

A 2019 Pew Survey have found that people feel that it is not possible to keep their data private or are confused about how to prevent it from being used by Big Tech and a Morning Consult 2021 survey found that over 70 percent of people support online data privacy legislation.

“And unfortunately, privacy is becoming a luxury good. So, what’s happened is your data, every time you type something in on your computer, you search for something, or you’re on your phone, you’re actually being tracked, you’re leaving breadcrumbs and a trail so that you can be found because you are the product,” said Hoffman.

“So nothing you do is private, there are about 2,000 bits of information that Big Tech has on you. Right now, nobody probably knows exactly where you are, what medications you take, your sexuality, what you buy online. But you know who knows? Big Tech knows.”