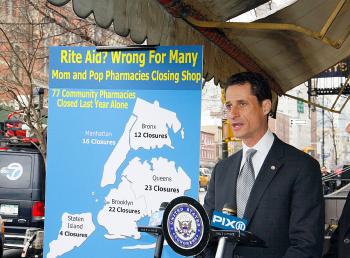 BAD RX? Rep. Anthony Weiner with a map of New York City independent pharmacies that have closed over the last year, as big chains have continued to grow. (Li Xin/The Epoch Times)
US

By Julia Kantor
Print
NEW YORK—A new study conducted by Rep. Anthony Weiner, a member of the House Commerce Committee, has found that 77 independent community pharmacies went out of business over the last year, whereas the number of chain pharmacies in New York City has steadily increased from 165 to 654 since 1990.

Giant pharmacies, such as Duane Reade, Rite Aid, CVS, and various supermarket and mass merchant chains, dominate the market across all boroughs of New York City. Duane Reade leads with the largest number of open stores, currently at 226. Higher drug prices and lack of personable service may face consumers as a result of this trend. The study reported that small independent pharmacies were charging customers an average of $828 less per year for a 10-drug supply than their big chain counterparts.

In response to these findings, Rep. Weiner has proposed a Community Pharmacy Fairness Act that will enable independent pharmacists to join forces in order to match the bargaining power of mass merchants during insurance contract negotiations.

"The invasion of the chain pharmacies has overrun our shopping strips. The result: higher prices, less personalized service, and the changing face of our neighborhoods. It's time we gave neighborhood pharmacies some first aid in the fight against Rite Aid," stated Rep. Weiner.

To categorize pharmacies, Weiner’s staff used definitions provided by the National Association of Chain Drug Stores, which defines a neighborhood drug store as 3 pharmacies or less, and a chain drug store as four pharmacies or more (including supermarkets and mass merchants).