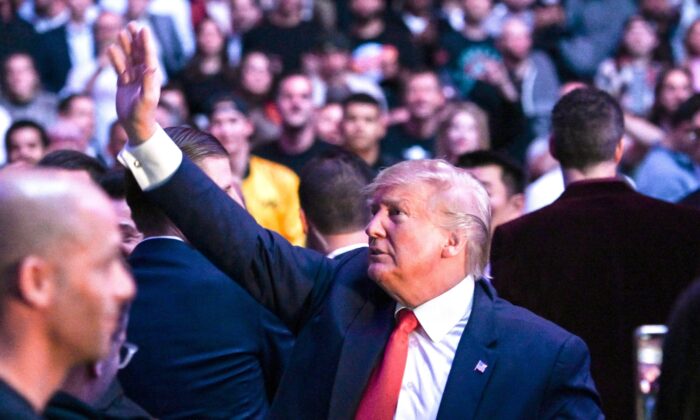 White said that when Trump walked into the main arena to attend the mixed martial arts event, it was an unforgettable moment. “I’ve walked out of that tunnel for the last 20 years [and] I’ve never [expletive] seen anything like that in my life like tonight, when I walked out of that tunnel with him,” White said. “I’ll never forget it as long as I live. It was crazy.”

And for the sport of mixed martial arts, White said it was a landmark night to see a president of the United States in attendance. The first UFC event was held in the early 1990s and was described by some U.S. politicians as “human cockfighting” and was later banned in the state of New York.

“Tonight wasn’t about how you feel politically about the president,” he said. “We weren’t legal in New York because of some political [expletive] a few years ago. Tonight, the president of the United States was here, watching a UFC event.”

“Whoever you are, this is America. You can believe or do whatever you want. If you want to boo, you can boo,” White told reporters after the event, about the crowd’s reaction to the president, which might be called mixed.

“As an American, you can do whatever you want to do, and you can choose whatever side you want to be on. So I just felt like tonight, we were going to walk in and whatever happened, happened. The guy told me as a friend, he was coming to see the fights, and he did tonight, and I appreciate him, and it was a big night for the sport.”

White also made note of how security was handled.

“They wanted him in a suite, of course, (but) he doesn’t listen to them. He does what he wants to do. But yeah, they wanted him in a suite. I’m not an expert in security, but I think it’s a lot easier to protect him in a suite than it is in the second row. But, again, a testament to our fans. It’s our president. It’s the president of the United States, man. And tonight, I was happy and proud that the crowd here in New York treated him with respect and just made the night so much cooler. Everything was so cool tonight,” he said.

White noted that Trump has been a longtime supporter of MMA and the UFC.

“Everything that ever happened to me in my career, Trump was the first guy to pick up the phone and reach out to me,” White said. “From getting back on pay-per-view, getting our first TV deal when we did the big FOX deal, the guy always reached out to me.”

In 2016, White spoke at the Republican National Convention in Cleveland to endorse Trump, again noting that he was a major supporter of MMA in the early days of the sport.

He then recalled another moment when Trump wanted to come to a UFC event, headlined by superstar Conor McGregor several years ago.

“He called me the night that he was elected and told me to get down to the afterparty, and I went, and he wanted to come to the Conor McGregor fight the next night. Obviously, he didn’t know what he didn’t know at the time, how crazy it would be.

“And then he called me the next morning and said: ‘You know what? I’m going to ruin your event. I think it will ruin it. They’ll have to shut everything down, and I don’t think it’s a good idea. Let’s plan this again when there’s more time to plan,'” he said.