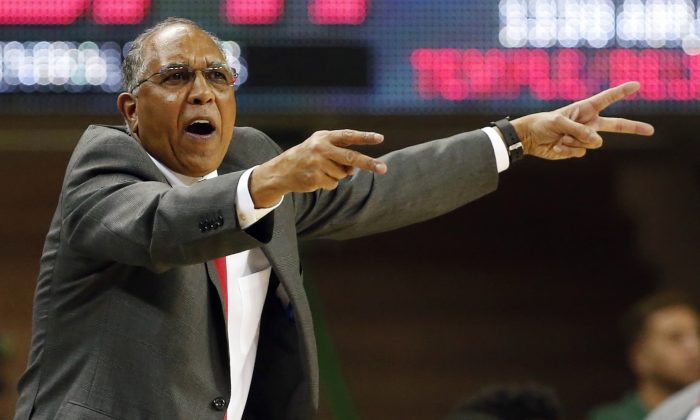 In this March 6, 2015, file photo, Texas Tech head coach Tubby Smith points to his defense in the second half of an NCAA college basketball game against Baylor in Waco, Texas. (AP Photo/Jerry Larson, File)
Sports

“Thirty seconds is not going to have an impact on the game,” the Kentucky coach said.

Roy Williams echoed that sentiment, if a bit less forcefully, and John Beilein figures the adjustment should be easy enough.

At a golf event Monday that included some of the game’s most successful coaches, the reaction to a reduced shot clock was tame. The NCAA Men’s Basketball Rules Committee has recommended shortening the shot clock from 35 to 30 seconds, a change that still has to be approved by the Playing Rules Oversight Committee.

The NCAA is trying to speed up the game and boost scoring, and the 30-second shot clock was tried out.

“I wouldn’t mind it being even shorter,” he said. “To me the difference from 35 and 30 is very small. When I first became a head coach we had a 45-second shot clock and it went to 35, and that changed it a little bit. I don’t know that going from 35 to 30 is going to change it very much.”

The NCAA is trying to speed up the game and boost scoring, and the 30-second shot clock was tried out during the NIT, CBI, and CIT postseason tournaments. Possessions per game went up 1.02 and offensive efficiency was up 0.6 points per 100 possessions, according to basketball statistician Ken Pomeroy.

Williams’s North Carolina teams have been among the most fast-paced in the country, so it’s easy to understand why he’s fine with a shorter shot clock. Beilein’s teams, on the other hand, have employed a more methodical approach. At Michigan, he’s produced some tremendously efficient offensive teams, but the Wolverines are willing to be patient.

Now, they might have to shoot a bit sooner.

“We went to Europe last year, and we played with 24 seconds, and it really didn’t affect us very much,” Beilein said. “It is something we’ll just have to adjust to. I think we’ll have to practice for a while to really get it.”

The shot clock hasn’t been reduced since dropping from 45 to 35 seconds in 1993–94. That was Beilein’s second season as the coach at Canisius.

“We were outmanned at Canisius and we shortened the game with the 45-second clock,” he said. “It does give teams that might be undermanned a little bit better spot at 45. Now 35 to 30, I don’t know if there will be a big difference.”

Calipari is convinced there won’t be. Pomeroy’s website ranks teams in terms of possession length at both the offensive and defensive end—with the No. 1 team having the shortest possessions, while teams outside the top 300 had the longest. Kentucky ranked 98th on offense and 327th at the defensive end last season, which suggests that opposing offenses were comfortable slowing the game down against the talented Wildcats.

But Calipari said even the most methodical teams should be able to operate the same way with a 30-second shot clock.

“Let’s just talk Wisconsin,” he said, referencing the team that ended Kentucky’s unbeaten run in the national semifinals this year. “They were one of the slower teams—their efficiency was really good, so they scored on a high percentage, they were a good defensive team. But their average seconds per possession, and they were one of the slowest teams, 22 seconds. And if they’re the slowest teams, you could go to the 24-second clock and it would be fine.”