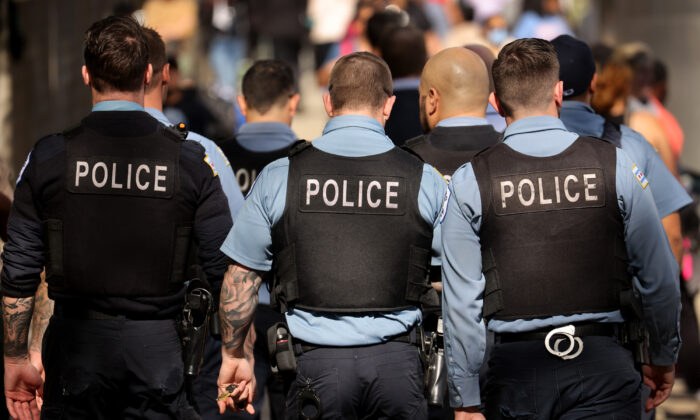 The number of Chicago police officers on criminal misconduct charges increased significantly in 2021, according to records obtained by The Epoch Times.

Between 2017 and 2020, only one or two Chicago police officers were charged annually for criminal misconduct, according to records provided by Cook County State’s Attorney’s Office (CCSAO.)

Citizens can file complaints directly to the state attorney’s office.

The Chicago Police Department’s Bureau of Internal Affairs and Civilian Office of Police Accountability also refer cases to the office.

The incident happened on Feb. 9, shortly after Roman and other police officers pursued and arrested a 17-year-old male for an alleged carjacking.

According to state prosecutors, the suspect kept yelling his handcuffs were too tight. As a police officer was adjusting the handcuffs, Roman yelled, “Shut up!” and shoved his flashlight between the suspect’s buttocks.

On Sept. 1, Chicago police officers Victor Guebara and Jeffery Shafer were charged with aggravated battery and official misconduct for allegedly using excessive force during an arrest.

Both charges are punishable by probation, or up to five years in prison, according to prosecutors.

In January, the two officers spotted a stolen car through a license plate reading and started chasing it. At one point, the stolen car struck the officers’ squad car before it lost control and crashed into an alley. Three suspects got out of the car and ran on foot.

An unnamed assisting officer apprehended one suspect and turned him onto his stomach to handcuff him. Guebara walked up and allegedly struck the suspect in the face with a closed fist.

Then Shafer allegedly straddled the suspect from behind and struck him in the head four times with a closed fist before he pushed the suspect’s face into the sidewalk. Then the officer dragged him to his feet and pushed him face-first into a metal fence, according to the prosecution.

In August, Chicago police officer Melvina Bogard was charged with aggravated battery involving a firearm and official misconduct following an on-duty shooting at a subway station.

In January, Chicago police officer Louis Garcia was charged with one count of criminal official misconduct for allegedly choking a handcuffed suspect during an arrest.

The offense allegedly occurred during an arrest in May 2019, when Garcia is said to have choked a suspect for about 10 seconds after the suspect threw a racial slur at him.

Then as the suspect tried to bite Garcia, he struck him with his elbow, resulting in a cut to the person’s right lip, according to prosecutors.