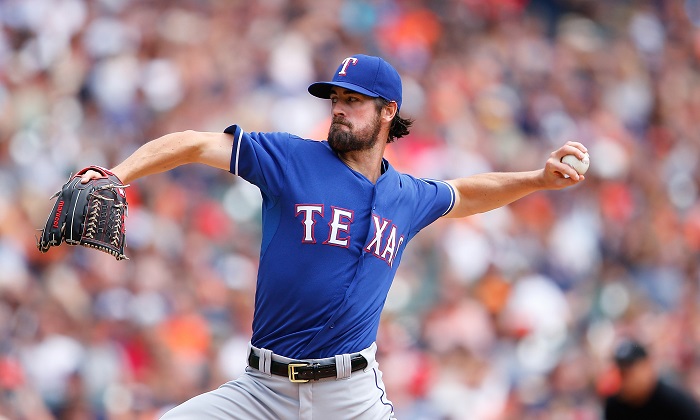 A file image of Cole Hamels of the Texas Rangers pitches during the first inning of the game against the Detroit Tigers on Aug. 23, 2015 at Comerica Park in Detroit, Michigan. (Leon Halip/Getty Images)
US News

Professional baseball pitcher Cole Hamels and his wife Heidi have donated their $9.75 million mansion near Branson, Missouri, to a non-profit organization that runs camp programs for children with special needs.

The Hamels gifted their 32,000 square foot home on Table Rock Lake, and its 100 acres of land, to the Christian-based Camp Barnabas said the charitable organization this week.

.@ColeHamels and his wife, Heidi, are making a donation of a lifetime. pic.twitter.com/iSghXL3ryU

“There are tons of amazing charities in Southwest Missouri. Out of all of these, Barnabas really pulled on our heartstrings,” said Cole Hamels in a statement.

“Seeing the faces, hearing the laughter, reading the stories of the kids they serve; there is truly nothing like it,” said the Texas Rangers Major League Baseball pitcher. “Barnabas makes dreams come true, and we felt called to help them in a big way.”

The Hamels made their decision after Cole transferred from the Philadelphia Phillies to the Texas Rangers in 2015 and made the lone-star state their permanent home.

Camp Barnabas said that the Hamels’ gift is the largest donation in its history. Based in Southwest Missouri, the 24-year-old non-profit says it has two locations dedicated to providing life-changing experiences to individuals with special needs or chronic illness, as well as their siblings.

Yahoo! Sports reported that it’s not known right now if Camp Barnabas plans to include the mansion into their programs or if they have other plans.