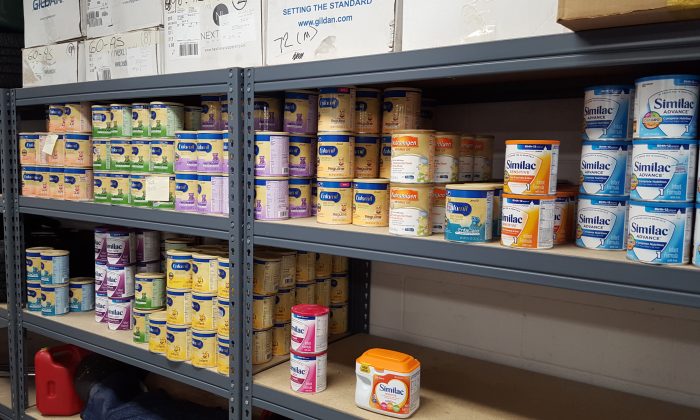 Baby formula seized by police in a file photo. (Logan Police Department via AP)
US

SALT LAKE CITY—The recent arrests in Utah of three people accused of stealing thousands of dollars’ worth of baby formula is the latest example of a problem that officials say is vexing stores and police nationwide as thieves systematically swipe the mixture from shelves and resell it to unsuspecting parents.

Baby formula is a major expense for many new parents, with small canisters starting around $20 and special or prescription blends costing two or three times that.

The high price and broad demand for stolen formula make it an enticing target for thieves, who typically sell it at flea markets or on websites like Craigslist and eBay.

It’s also widely used. More than a third of infants receive formula in addition to breastmilk in their first six months, the Centers for Disease Control and Prevention estimates. Often, babies who are weaned off breastmilk will continue to drink formula into their toddler years.

The high price and broad demand make it an enticing target for thieves, who typically sell the stolen formula at flea markets or list it on websites like Craigslist and eBay.

In late December, police in Logan, about 80 miles north of Salt Lake City, confiscated 422 cans of stolen formula worth $8,000 to $10,000. It came from stores in Logan and three other northern Utah cities, and officers are looking for ties to similar recent thefts in Idaho cities about 150 miles away, Police Capt. Curtis Hooley said.

In Pleasanton, California, thefts of large amounts of formula are reported at least once a month, with thieves frequently hitting multiple stores around the San Francisco Bay Area, according to police Lt. Kurt Schlehuber.

He doesn’t think the culprits are parents trying to feed their kids.

“There are people that are making money off of selling the stuff,” Schlehuber said.

In April, Pleasanton police arrested two people suspected of stealing dozens of containers of the product.

Officers happened to see the pair running from the store with shopping baskets full of formula. But arrests can be rare when police often have only an anonymous face captured by a surveillance camera, Schlehuber said.

Around the country, law enforcement agencies in recent years have reported heists ranging from thousands to several million dollars’ worth of baby formula.

Investigators working on that sting—called “Operation Hot Milk”—said thieves were paid between $100 and $300 a day and used multiple lookouts while filling bags with formula. They hit 15 or more stores a day and later repackaged the formula and sold it in other states, authorities said.

The Infant Nutrition Council of America, an association of baby formula manufacturers, does not keep statistics on the thefts but said it’s a continuing problem nationwide.

Large thefts can be a particularly costly problem for many such stores, which are required to keep a minimum amount of formula on their shelves to accept customers spending money dispersed through the federal Women, Infants, and Children nutrition program, known as WIC.

Hatcher said the industry has been working to combat the thefts for about 15 years.

For parents, stolen formula can be a safety concern.

They can’t be sure that what they’re buying has been stored at proper temperatures or isn’t past its expiration date. Some sophisticated theft rings even print counterfeit formula labels to make a cow’s-milk-based product appear to be a more expensive soy or rice formula designed for children with milk allergies, Hatcher said.

Mardi Mountford, the nutrition council’s executive director, recommends that formula be bought only from a trustworthy retailer, either in-store or online.

New mother Erica Otten of Tabernacle, New Jersey, said she understands a parent’s temptation to try and save on the expensive product by shopping for a discounted version online.

Her 5-month-old daughter has a protein allergy requiring a specific formula that costs $32 for a 1-pound can that lasts four days at most. Still, Otten sticks to the major retailers.

“It sounds scary because you’re feeding it to your infant,” she said. “I inspect everything like crazy—the expiration date, the fact that it’s sealed.”

To help with the cost, Otten signed up to receive regular coupons from formula manufacturers while pregnant. She now swaps the coupons she doesn’t need with other mothers around the country.

Some retailers take extra steps to combat thefts, keeping their baby formula under lock and key. Others stamp their store names and locations on containers to alert consumers or police if the stolen product turns up for sale somewhere else, Hatcher said.

When large amounts of formula are stolen, lot numbers are provided to websites like eBay that can monitor sale listings for the products.

To chip away at the black market demand, federal officials have started requiring grocery stores and retailers that participate in the WIC program to buy formula only from approved wholesalers.

“Each one of these tactics, it seems to have helped alleviate some of the ability for them to resell this product quickly,” Hatcher said. “That doesn’t mean it’s still not an incredibly attractive product to try to steal.”