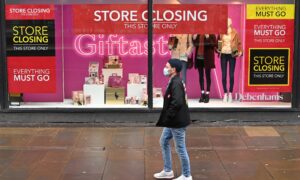 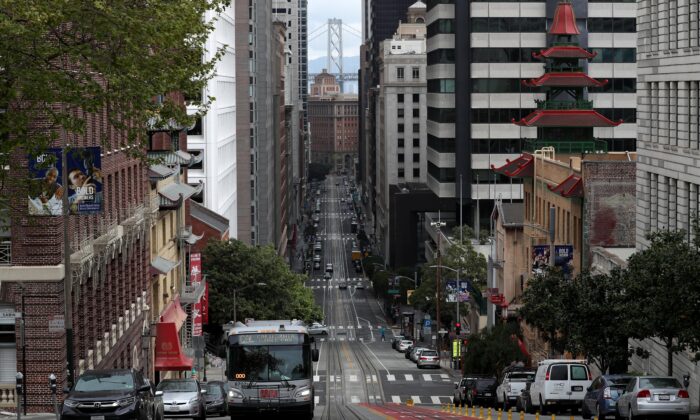 An empty California Street during the coronavirus pandemic in San Francisco on April 6, 2020. (Justin Sullivan/Getty Images)
US News

Americans leaving the big cities due to CCP virus lockdowns isn’t just a temporary phenomenon, as young professionals are building homes in smaller cities and millennials are “finally nesting,” according to a report by a California-based commercial real estate firm.

“In 2020, we saw an untethering of employees and their place of work unlike any other time in history,” stated the report by Graceada Partners, released Jan. 13.

“This shift has flattened the labor market and added tailwinds to quality-of-life-focused smaller cities as employees vote for a shift in work–life balance by picking up and moving.”

While the trend of remote work has been well underway at least since the mid-2000s, the pandemic situation has accelerated it by a decade, Joe Muratore, Graceada co-founder, told The Epoch Times.

The phenomenon is particularly visible in the sub-lease market in the ultra-expensive first-tier cities, where corporations stuck with long-term leases struggle to find tenants.

The sub-lease space in areas such as Manhattan and San Francisco make up some 30–50 percent of the commercial real estate offerings.

As a result, “the value of downtown high-rises will decline by 10 to 15 percent,” the report predicts.

By contrast, in cities such as Memphis, Syracuse, and Austin, sub-lease is only 1 percent of vacancies.

It’s primarily the white-collar and creative sectors driving the shift as they’ve been escaping the city lockdowns due to worries about health and safety.

“Tech companies are almost all working from home: higher-educated, more affluent professionals who once lived in bigger cities have decided to take a ‘gap year’ and move to places like Alaska, Santa Cruz, Lake Tahoe, or even back to their hometown,” the report states.

With the new-found freedom, many are already making those changes permanent.

“They are buying homes at a breakneck pace,” the report states.

Home ownership rate hit a 12-year high in the second quarter of 2020.

“While the trend started several years ago, it has markedly accelerated during the pandemic. Millennials in particular are rushing to buy homes. And Gen Z is joining in the trend—homeownership for people under 25 is up from 24 to 29 percent over a matter of months, according to United States Census data.”

That doesn’t mean the end of office workspace, though, the report notes.

“People prefer the workplace, but only if it supports their work, and by that we mean high-functioning, high-culture workspaces. … If they don’t feel by going to the workplace they’re going to be more productive, they’d rather do it from home,” Muratore said.

The situation has shifted power toward the employees having a stronger position to negotiate remote work arrangements, he said, and it’s likely companies will come up with a mixed, hub model where many employees are only required to show up at the headquarters once a week, for example, and work the rest of the week from home or from a branch office.

The report states: “Major companies like Oracle are taking the leap and shifting their ‘headquarters’ to a secondary market. Other powerhouse tech companies like Amazon, Apple, and Google plan to further a hub and spoke model with offices across the U.S. They plan to embrace a ‘remote-first’ work schedule and commute to an outpost office as needed.”

That can benefit the bottom line, too, as companies can reduce their office footprint and cast a wider net while fishing for talent.

“Diversity in employment—diversity in people, in locations, in backgrounds, etc.—leads to original ideas and approaches and an environment for innovation,” the report states. “There is more talent to go around when you’re not just centered in one place.”

“At the very least, it is a major conversation among executives and in virtual board rooms,” the report states.

The situation can present opportunities for smaller cities that have long suffered under the shift of manufacturing overseas.

“Renaissance in traditionally working-class cities is a real possibility,” the report states. “The key here is that the cities that may have been losing population and/or economic activity for the last half-century will need some sort of cultural or lifestyle renaissance that leads more younger professionals to choose to live there and truly make it another outpost economy with increased business activity.”