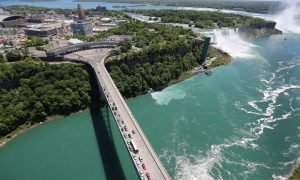 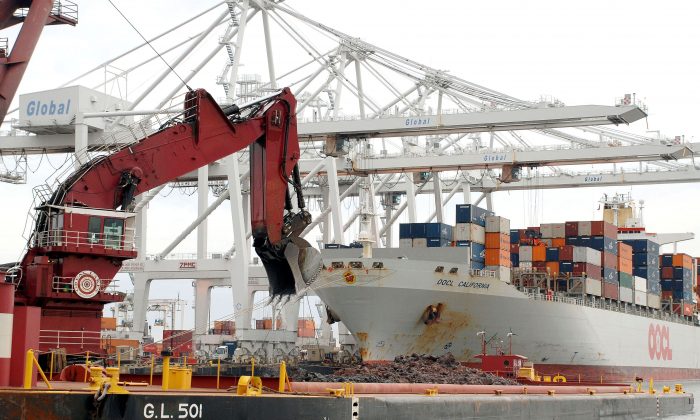 Dredged bedrock in the Port Jersey Channel can be seen in the foreground, part of a massive project to deepen the waterways that serve the Port Authority of New York and Jersey. (V. Elias)
New York

NEW YORK—It’s been over a decade in the making, but a $1.6 billion project to deepen New York Harbor for a new larger class of container ship is nearly complete with one catch: it’s contingent upon a final, slightly tricky, operation.

All told, 35 miles of channels have been dredged to the required 50 feet, but a critical final step has met with complications. Originally slated for completion at the end of 2013, the project had a three- to six-month setback when Hurricane Sandy hit. In addition to new shoals that needed to be re-dredged, relocation plans for a pair of 90-year-old underground secondary water pipes had to be refashioned.

Situated under what’s known as the Anchorage Channel, the pipes run from Brooklyn to Staten Island and are estimated to be about 54 feet deep, extremely close to the dredging depth. The original plan was to dredge the channel after the pipes were deactivated, but the pipes’ new tunnel was flooded and the boring equipment damaged during Sandy. Tunneling operations won’t start up again until 2014, according to the city’s Economic Development Corporation, which manages the implementation of the project through the construction phase.

For the U.S. Army Corps of Engineers, which is carrying out the project in cooperation with the Port Authority of New York and Jersey (PANYNJ), that won’t be quite fast enough for such a key waterway.

“It is a big deal,” said Bryce Wisemiller, Army Corps of Engineers Project Manager for the Harbor Deepening Project, who added that the channel is the only entry point for container ships to the port’s various docking terminals. “Most of the cargo that comes here is destined for people in New York City and the surrounding area.”

To keep the project moving forward, the corps is now figuring out how to precisely dredge while the pipes are active and in their current location, which must be protected even though they haven’t been needed in almost a century. More mechanical engineering processes at the time the pipes were installed means their precise location must be determined before proceeding.

The project to deepen the harbor, which should wrap up in 2014, has played out against the backdrop of the impending completion of a global shift in the size of container ships. New locks in the Panama Canal, expected to be completed in 2015, will allow passage of these larger ships, dubbed New Panamax. They measure over 160.7 feet wide and 1,200 feet (or four football fields) long. According to the Army Corps of Engineers, New Panamax ships are already being manufactured in strict accordance with the dimensions of the new locks at the Panama Canal.

The new ships will be almost double the size of current vessels that bring goods in and out of the greater New York City area.

“I think there will be a startling difference in the size of ships seen entering and leaving the Port,” said Wisemiller. “A few at first, now and then, and then more and more as the years pass.”

According to John Boule, vice president of Parsons Brinckerhoff, the business of deepening New York Harbor is a race against time.

“Everybody is going to be competing for these bigger ships,” said Boule, who was the Army Corps of Engineers’ New York District Commander from 2009 to 2012 and oversaw New York Harbor as part of that position. “The whole point is to finish before they do. This is a competition for business–if the ships start going elsewhere, you lose them and they never come back.”

As soon as the Panama Canal can handle the New Panamax ships, the PANYNJ will be a prime destination. The largest port on the east coast and the third largest in the United States after the Long Beach and Los Angeles, the port puts the dollar value of all cargo that moved through it in 2010 at over $175 billion.

“It’s just basic economy of scale,” said Boule. “If you can put more stuff on a ship and get it across, you’re going to make more money. You’ll be able to get more stuff quicker to the people who are buying it or needing it.”

That proximity means big business. The extra five feet of water still needed in the Anchorage Channel could be the difference between hundreds of thousands of jobs and billions of dollars. The port supports over 279,200 jobs, many in high-quality skilled trades that account for about $12 billion in wages every year. Then there’s the tax revenue: $5 billion annually for state and local governments.

The value of goods being moved is also big money. Since cargo value is generally considered private by businesses shipping the cargo, Wisemiller said over the past several years he has tried to make an educated estimate. He concludes that the average value of goods on current container ships is in the tens of millions of dollars, while the value of cargo on New Panamax ships will potentially be in the hundreds of millions of dollars.

Wisemiller said that no other port on the east coast really compares to the scale that the PANYNJ offers.

“New York is by far the big apple,” he said.