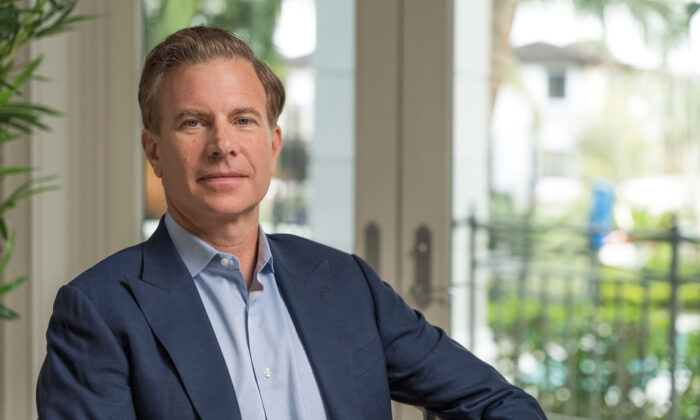 Big Brother Is Getting Bigger

“This is a surveillance tool, and it’s disguised as a payment mechanism,” Erik Bethel said of the Chinese regime’s new digital currency.

In this episode of “American Thought Leaders,” host Jan Jekielek and Bethel, a global finance analyst, discuss the situation in China, and the threat of the digital yuan to the U.S. economy and to the free world.

Erik Bethel: After I joined a private equity fund in China, my wife and I spent seven years living in Shanghai. My three kids were born there. We learned a great deal about Chinese culture, and I grew very fond of the Chinese people. I’m not as fond of the Chinese Communist Party.

It takes a physical dollar bill and changes it to its digital equivalent. Just like the dollar, it’s an IOU of the central bank.

This technology is inevitable. Someday, we’re going to look back on coins and bills as museum pieces.

Now, back to China. During the Olympics, [the regime launched] their digital currency. This is a surveillance tool, and it’s disguised as a payment mechanism. It’s going to allow the People’s Bank of China to peer into everyone’s purchasing history.

So what happens if you’re an ethnic or religious minority in China? What if you purchase a Bible? There are millions of Chinese Christians, for example, and there are a lot of ways the Chinese government could use this as an instrument of surveillance, tying it to their social credit score and keeping an authoritarian regime alive forever. And that’s very frightening.

Mr. Jekielek: A few people may be unfamiliar with China’s social credit system. Could you explain that?

Mr. Bethel: Imagine everything in your life, whether it’s jaywalking or paying your taxes on time, is processed, and you’re given a rating. Millions of Chinese over the past several years have been denied travel to visit their relatives because their social credit scores were low.

Now, imagine if you’re a dissident. For all intents and purposes, you don’t exist. That’s the result of the social credit score. Tag on the money element, and you can see how worrisome it could be for people.

Now, imagine the digital Chinese currency being exported to authoritarian regimes around the world. The Maduro regime in Venezuela, for example, would relish having a digital currency where their government could peer into what the opposition is doing.

Now, what if the Chinese technology for digital currencies could be replicated in Venezuela? What if this technology were seamless such that Venezuela could sell its oil and denominate it in digital Chinese renminbi? It’s not going to happen immediately, but what if it happens in 5 to 10 years? It could be very problematic from an American national security perspective. And only a few people are thinking about that right now.

China has stated that privacy will be embedded in its digital currency. Well, China also said that it wouldn’t interfere in Hong Kong’s domestic issues, that it wouldn’t build islands or militarize the South China Sea.

As for ongoing investments in China, at the end of the day, capital untethered from a moral compass is immoral. It just goes wherever there’s money to be made.

So, do we consciously forget there’s human organ harvesting in Xinjiang? Or do we just want to make money in China and don’t really care?

Other people morally equivocate. They say, “We work with other countries that are doing equally bad things.” But I don’t think anything rises to the level of a million people in detention centers, forced organ harvesting, and the sterilization and erasure of an entire ethnic group. I don’t think people realize what’s going on.

Mr. Jekielek: This is a natural place to look back to the Chinese digital yuan. What might prevent these kinds of technologies from being deployed in Western society?

Mr. Bethel: Digital currencies could be a tremendous asset to society. You can eliminate to a great degree corruption, money laundering, and criminal activity. You can also do direct cash transfers to citizens.

But here’s a concern. Imagine a world where my transactions were open to the government, which is keeping tabs on how much I’m spending on ice cream sundaes or wine or gas for my car.

Digital currency can be good for humanity and for me, but what if the government is telling me what I should or shouldn’t do with my own life? Whether that concern turns out to be real or imagined, time will tell. But citizens need to think carefully about how a digital currency will affect their lives.

Mr. Jekielek: Is it even possible to create some kind of a central bank digital currency that would maintain privacy and anonymity?

Mr. Bethel: The short answer is yes. An intelligent future digital dollar project could include a spectrum where you’re fully private and fully anonymous.

Future policymakers might consider that within a band of, let’s say, zero to $10,000, whatever you do in your digital wallet is private. From $10,000 to whatever, it’s pseudo-anonymous. And then from that point on, it’s open for the government to look at. These things can be done.

Mr. Jekielek: Let’s go back to the Chinese regime. It has all sorts of ways to coerce countries to adopt the digital yuan.

Mr. Bethel: Here’s an example. Africa has received enormous amounts of money from China in the form of debt, so much debt that some countries will never be able to pay it off. They’ve taken loan after loan from China, and now they can’t pay their teachers and police officers because they have to pay off the Chinese.

It’s not inconceivable that China might say, “Look, we’ll shave off a couple billion dollars from what you owe us if you let us set up your digital Zambian dollar. And you don’t have to settle your copper exports in U.S. dollars anymore. You can settle them in digital yuan.” This will happen around the world, and U.S. policymakers need to pay attention.

Mr. Jekielek: What are other implications of a digital yuan?

Mr. Bethel: Let’s assume that in three years, you have 25 nations using the Chinese digital currency. If these countries are exporters of commodities and the dollar is no longer used for these exports, what does that mean for the reserve currency status of the dollar? How do we afford our current trade deficits?

Mr. Jekielek: What do you see as the way for the United States and other free societies to fend off the digital yuan?

We should also educate ourselves. We can’t stick our head in the sand and say, “We’re the United States, and we have the dollar. All this other stuff is nonsense.” Let’s educate ourselves, particularly our policymakers, on what’s happening.

And we shouldn’t compete with a Chinese digital renminbi by becoming more like China. People are going to say, “If the digital dollar and the Chinese e-yuan are both surveillance tools, what’s the difference?”

We should compete on the grounds of privacy, security, and transaction speed. If we try and mimic China, we lose.

We might even open-source some of that technology. Open source means putting some of the code out there for everyone to see, so that we can dispel any notion that we’re using this as a surveillance tool.

Trust underpins everything we’ve been discussing. Whether it’s trust in our institutions, media, social media, or big tech, it’s a travesty that over the years, the erosion of trust has fallen so low. I hope that as we develop a digital currency, we imbue it with a value system that’s transparent and that currencies are used for good and not for evil.