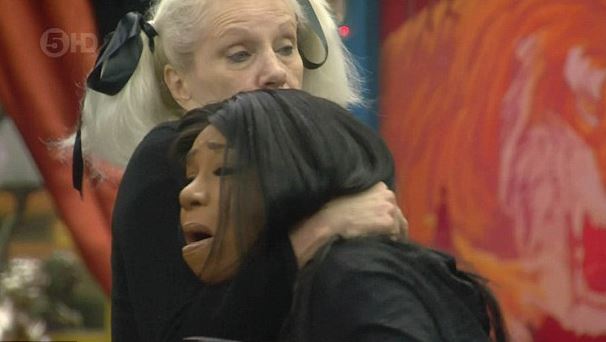 ‘Big Brother’ Aired David Bowie’s Ex-wife Finding Out He Died, but Some Fans Didn’t Like It

David Bowie’s ex-wife, Angela Bowie, is part of the current season of Celebrity Big Brother, and the U.K. show filmed her learning that Bowie had died.

Angela was told the news by her agent in private, apart from the other contestants, but agreed to keep filming in the show.

She also shared her reaction to the news in the confession booth.

“I haven’t seen him in so many years. I can’t make a big drama about it,” Angela said. “But I feel an era has ended.”

Angie was told the tragic news about David Bowie off camera by her agent, then afterwards spoke to BB about it in the Diary Room. #CBB

The Big Brother producers decided to make the news and reaction a big part of the episode, prominently featuring it in the promotions.

Also included was a part in which Angela decided to share the news with other contestants, and one broke down because she misunderstood and thought Angela was referring to the contestant named David instead of David Bowie.

Angela was married to Bowie from 1970 to 1980. He remarried in 1992 to Iman, a Somali fashion model, with whom he was married until his death.

There are no words. You can NOT miss tonight’s #CBB. Watch this preview, and tune in tonight at 9pm on @channel5_tv https://t.co/Gd2di9gJml

While the show will likely see big ratings for the episode, some fans were not pleased.

“To show Angie’s grief and David’s death to be apart of the big focal point in #CBB is wrong on so many levels,” said one.

“Wow can’t believe #CBB just showed the moment Angie Bowie found out as a ‘preview’ for tomorrow’s show. Using a death for viewing figures,” added another.