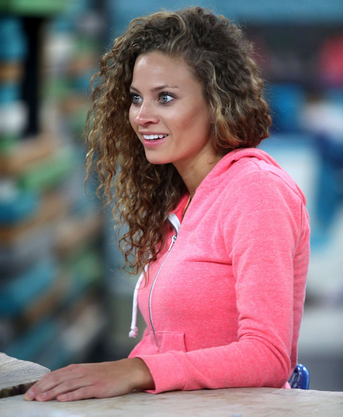 Amber Borzotra was evicted by Big Brother 16 on Thursday night, with all votes but one going against her.

Jocasta Odom was the other contestant who was up for elimination.

All the contestants but Zach voted Amber off. Zach voted for himself.

“Donny rejected Team America’s mission and voted out Amber instead of Jocasta. He apologized to America saying it was too risky. Derrick came in next and apologized as well saying they tried to convince Donny but were unable,” according to the Big Brother Network.

“Amber tells Julie she blames a big part of her eviction on Caleb’s obsession, but is also feels most betrayed by Cody since they were so close. Amber hopes to get her bunny slippers back from Caleb, but Julie doesn’t think that’ll happen. Amber says she’s single and won’t be Caleb’s date to finale night.”

Borzotra, 26, told The Hollywood Reporter that her time was “fun” but she found Caleb’s obsession weird.

“It was bad. I felt awful because I tried to deal with it as best I can and I had never dealt with anything like that so I didn’t know how to react. I was trying to as nice as I could and try to tell him in a nice way that I’m not interested and I don’t think he bought it,” she said.

She added that she wished she had tried to get Caleb eliminated.

“I think if I had gone to the right people about getting Caleb out, then maybe it could have gotten me a little bit more time in the house because he was my next target. Of course, I was looking at Zach as a threat, but then I was seeing who my real threat was. Last week was very weird in the case between me and Caleb so it was, ‘OK, he has to go.’ But I’m not there to make that happen so I hope the rest of the house does make that happen this week.”

Amber also said that she thinks a male will win.