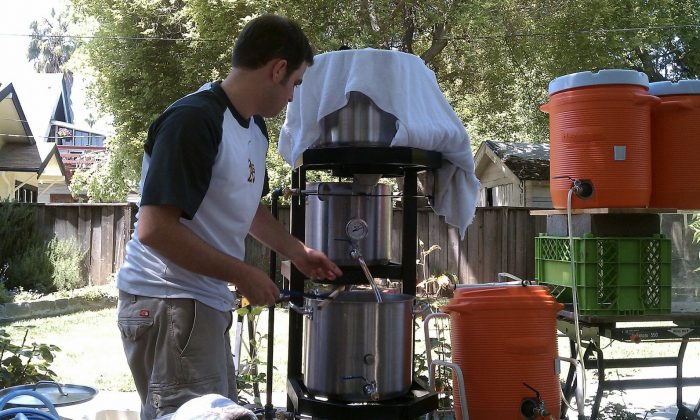 A man uses a homebrewing installation to brew beer. (Courtesy of Derek Wolfgram)
US

LOS ALTOS HILLS—Brewmasters rejoice! Something Cheers-ful is brewing this season for homebrewers around the world, as beer aficionados and their friends who are passionate about beer celebrate National Homebrew Day, originally announced by Congress on May 7, 1988, and held each year on the first Saturday in May.

Today there are an estimated 750,000 homebrewers in the United States, and the number of breweries is rapidly growing. So popular has homebrewing beer become that Colorado State University students can now get credit for brewing and drinking beer. Wish they had something like that when I was in college.

My first introduction to the homebrewing phenomenon started when my son-in-law, Michael Vestel, barricaded our garage with a setup of intricate equipment in all sizes, colors, and shapes. It looked like an outer-space structure that kept growing wings and pipes in all directions.

His first bouquet of homebrewed beer was eagerly anticipated and definitely worth the wait. With the uniqueness of the blend and the soothingly smooth flow in my mouth, I realized Michael was a very creative and knowledgeable brewmaster.

Michael also connected me with his neighbors, members of the BrewLab homebrewing club in San Francisco, Calif. On my recent visit to their brewery, I met Sam Gilbert, Matt Smith, Angelica Serr, and Emily Ford.

According to Sam, all craft beer companies started as homebrewers. After prohibition, people in the United States were not allowed to brew beer at home, and only the conglomerate beer manufacturers were given the opportunity to apply for a license. But after 1970, laws were put in place to make homebrewing legal.

Angelica, a new kid of seven months on the brewing block, says there’s a close similarity between her profession as a microbiologist and brewing: both require maximum cleanliness in order to make the product perfect. She mostly bottles the beer at home and joins the BrewLab team for a fun social life.

“It’s amazing how many friends you have when you brew,” says Sam, who founded BrewLab over two years ago. A graduate of Harvard University with a degree in software developing, he and his partners brew beer with hops and cilantro that they grow in Sam’s backyard. They grind their own hops, barley, and yeast, which are the essential ingredients used in beermaking. In addition, they buy all the necessary ingredients at San Francisco Brewcraft, a popular and extremely busy supply store.

Matt, one of the partners in the BrewLab venture, explained that some people use their garage space to park their cars, but they use their garage to brew beer. Of course, some of the best innovations begin in garages. The Apple computer, for example.

Emily, a Stanford graduate who works as a project manager at Google, compares brewing techniques to those of a perfect art or craft. She demonstrated to me the art of sandblasting glass bottles for future beer bottling.

With my curiosity and quest to learn more about the homebrewing business, I turned to the wisdom of some of the 40 active brewmasters of the Silicon Valley Sudzers Homebrew Club, established in 1997, who graciously responded to my questions via email and phone.

I learned that some homebrewers started their brewing hobby after receiving a brewing kit as a present for Christmas. Most said they prefer homebrew to store-bought beer because it gives them the tremendous pleasure of creating their own brand. They strive to be original and achieve better quality.

Many love the social aspect of it—getting together with friends, having fun, barbequing, and spending wonderful weekends with people who share their interests. They also enjoy attending the beer can-ventions.

When I asked what inspired them to start brewing, I was touched by this answer: “Discovery Channel program called ‘How Beer Saved the World.’ And watching my first beer ferment and coming to the conclusion that beer is a living creation and not simply some product made by some large company.”

I also found the Sudzers I corresponded with to be quite creative in naming their beers: Go Go Brewing, J&L Brewery, Cloud Street, Solid Citizen Pale Ale, Jumbo Hops, Two for Tango, Hollywood Blonde, to name a few.

One common reason for belonging to a brewing club is to enjoy one’s passion for making beer and to have lots of fun with friends.

“You are never lonely when you brew,” Sam says.