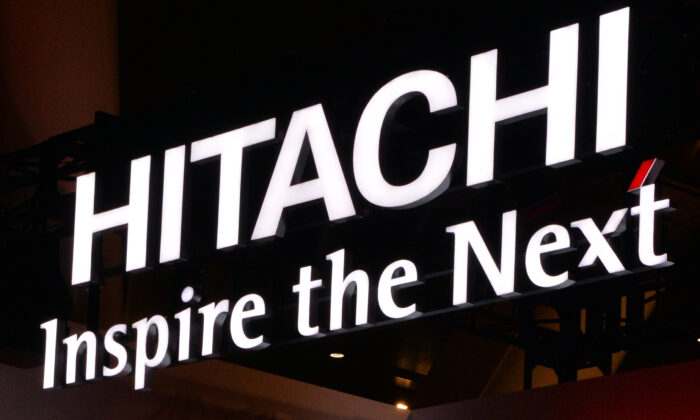 A logo of Japan's high-tech giant Hitachi at an exhibition in Tokyo on October 29, 2013. (YOSHIKAZU TSUNO/AFP via Getty Images)
Australia

The Northern Territory Government’s goal of achieving 50 percent renewable energy by 2030 came a major step closer on Monday as a tender was awarded for the 5MVA (megavolt amps) Darwin-Katherine Battery Energy Storage System (DK BESS) to be utilised in the Darwin-Katherine grid.

Hitachi Energy will provide components for, and build the $45 million (approx. US$32 million)DK BESS, also known as the “Big Battery”, which will be located at Territory Generation’s Channel Island Power Station.

In a media release on Monday, Hitachi Country Managing Director, Bernard Norton said that together with the Territory Government and Territory Generation, Hitachi is helping the Territory to “meet ambitious renewable energy targets, by harnessing abundant solar resources, and move towards a carbon-neutral energy future.”

“Hitachi Energy’s battery energy storage solution will be part of an intelligent electrical ecosystem and ensure full utilisation of solar energy generation and less reliance on fossil fuels,” he said.

The DK BESS is expected to bring cost savings of about $9.8 million (approx. US$7million) per year and pay for itself within five years.

The main objectives of building the DK BESS are to reduce the use of gas generators for the Darwin-Katherine system and provide further capacity for households to connect their rooftop PV solar systems.

It will also give industry the opportunity to invest in cheaper solar systems for their commercial and industrial operations.

Some of the other benefits of the “Big Battery” are greatly reduced carbon emissions for the Territory, delivering both cost savings of around $9.8 million and emissions reductions of about 58,000 tonnes per annum, as well as increased stability and reliability of the power supply.

Chief Minister Michael Gunner said that both the NT Government and Territorians  have backed renewables,

“The cutting-edge technology in our Battery Energy Storage System will reinforce the Northern Territory as the solar capital and comeback capital of Australia. The BESS will store power and be the backbone of the Darwin to Katherine Electricity grid which keeps the lights on for 150,000 Territorians,” he said.

Meanwhile, Renewables and Energy minister Eva Lawler hailed the BESS tender as a major step forward in the Territory’s plan for 50% renewables by 2030, calling it the cornerstone of the Darwin-Katherine System Plan.

“Renewables are the way forward, this is why we are investing in the BESS and hydrogen-powered generators so we can have clean and efficient energy which helps us reach our renewables and net zero-emission targets,” she said.

The awarding of the battery tender came at the same time as the Territory Government’s granting of “major project status” to a $15 billion (US$10.75 billion) project to produce green hydrogen in the Australian outback.

Expected to be at full capacity by 2027, the 10GW project will see the production of hydrogen at less than $2.80 (US$2) per kilogram, with a 410,000 metric tonne output capacity per year for domestic and export use.

Technology company Aqua Aerem will lead the world-first project, which will commence in 2022, and is expected to be producing commercial quantities of the gas as early as 2023.

Based at Tenant Creek, this will be the only truly green commercial hydrogen plant in Australia, employing “Desert Bloom” technology, which utilises atmospheric water capture and off-grid solar power to produce commercial quantities of renewable hydrogen at no expense to the scarce local water resources or environment.

In a media release on Monday, Aqua-Aerem co-founder and chief executive officer Gerard Reiter called the project “transformative” in the way it has solved water supply and solar/electrolysis integration problems that have so far impeded renewable hydrogen production.

“With today’s announcement, the pathway for green hydrogen becomes a reality,” he said.

“Our air-to-water technology, which solves this previously intractable water supply problem, is a world first; invented and developed here in Australia. This technology will open the door for green hydrogen projects to be located where the best renewable power sources are available, which is generally in the driest areas of the planet.”

Reiter highlighted the multiple competitive advantages of the project.

“It uses proven technology and has its own water supply. It benefits from the world’s best solar resources, does not require large sunk costs before it begins producing, and it is located at the ‘energy corridor’ of rail, road and gas pipeline infrastructure linking directly to Darwin Port,” he said.

Reiter added that the project will position Australia as a serious contender in the global hydrogen market, and give the Territory an economic boost, creating potentially a thousand jobs in construction and over a hundred full-time jobs in operation and maintenance of the project.

Chief Minister Michael Gunner agreed that Desert Bloom hydrogen will be a major boost for the Territory.

“Territorians will see the benefits on the ground in Central Australia and in the Top End with around 1000 jobs and $1 billion a year in export revenue from this project alone – it’s good news for the Territory,” he said.