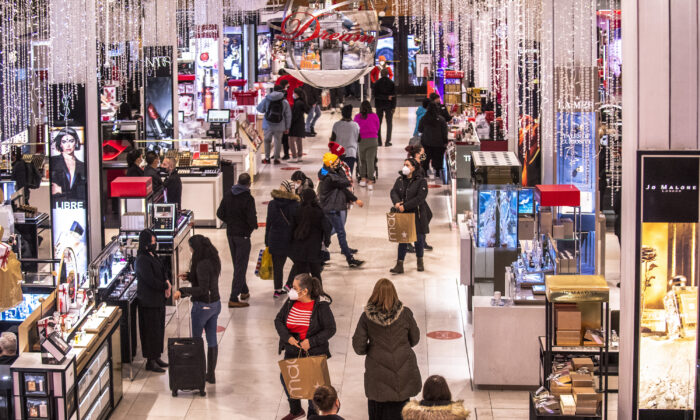 Some of the largest banks in the United States have remained optimistic about the economic outlook for the nation this earnings season, driven in part by healthy consumer spending.

Bank of America, in its reported earnings on Jan. 19, stated that its 67 million customers spent a record $3.8 trillion in 2021, which is a 24 percent increase from the pre-pandemic benchmark in 2019.

That spending has also continued in the first month of 2022, with payments up by 11 percent as of Jan. 17 compared to the beginning of January 2021, according to Bank of America.

CEO Brian Moynihan told CNBC on Jan. 17 that part of the reason behind the increased spending was the government’s unprecedented stimulus package aimed at keeping families afloat during the COVID-19 pandemic and a reopening of the economy after more than two years of various forms of pandemic-related lockdowns.

“People got a lot of stimulus money, and they’ve been spending it,” Moynihan said. “The unemployment rate is coming down, and people are going back to work. People can go to amusement parks. They can go on an inside-the-U.S. trip. They can go out to eat. You’re seeing everything open.”

JPMorgan in its fourth-quarter 2021 earnings call said combined credit and debit spending was up by 27 percent compared to the fourth quarter of 2019, with each quarter in 2021 showing “sequential growth compared to 2019.”

Travel and entertainment spending was up by 13 percent over the same period, according to the bank.

“The consumer is very strong,” Jamie Dimon, chairman and chief executive of JPMorgan, said. “The fact is, despite Omicron, in spite of supply chains, 2021 was one of the best growth years ever.

“The consumer is $2 trillion more in their balance sheet [in 2022]. Their home prices are up, asset prices are up, jobs are plentiful, wages are going up, which is good for them.”

Wealth and Investment Management company Wells Fargo also noted that credit card spending and median account balances for the fourth quarter were both up by 27 percent compared to pre-pandemic levels.

The company’s own earnings supplementals show that its allowance for credit losses for loans is $13.8 billion, down by $5.9 billion from the fourth quarter of 2020 and down by $917 million from the third quarter of 2021. Its credit card-related revenues were up by 3 percent in the most recent quarter, on higher point of sales volume. Debit card transactions were also at $122.4 billion in the quarter, up by 16 percent year-over-year.

Despite big banks insisting that consumers appear to be undeterred by the ongoing supply chain shortages, a labor crisis, and the increasing cost of food and goods and that they’re still apparently spending their hard-earned cash, inflation levels have risen to a 40-year high of 7 percent in the United States.

The country is also facing a surge in COVID-19 cases, driven by the emergence of the highly transmissible Omicron coronavirus variant, adding further pressures to the economy that some experts believe might dampen consumer spending.

According to Jan. 12 data from software company Adobe Analytics, online consumer spending in the United States during the holiday shopping season from Nov. 1, 2021, through Dec. 31, 2021, was weaker than expected, at $204.5 billion.

While that figure marks an increase of 8.6 percent from a year earlier, it was lower than the $207 billion predicted by Adobe and marked the smallest rise in holiday online consumer activity since Adobe Analytics started tracking holiday spending data in 2014.

The Bureau of Labor Statistics reported earlier this month that consumer prices rose by 7 percent in December 2021 from the same month in 2020, up from 6.8 percent in November 2021 and marking the third straight month that it exceeded 6 percent.