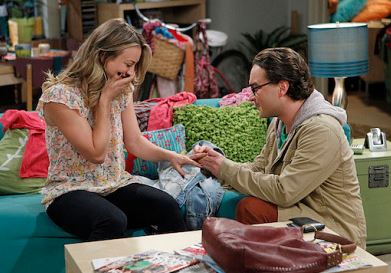 The Big Bang Theory season 8 will include Penny getting a new job.

Penny decided that she didn’t need to be famous or have a big career to be happy after she was canned from a B-movie, and she’ll continue to make “smart decisions” in the upcoming season of the CBS comedy.

“Penny has an interesting arc this year where she puts acting down,” said co-creator and executive producer Chuck Lorre at the Television Critics Association’s summer press tour, reported The Hollywood Reporter.

“She gets a shot to be a pharmaceutical rep at Bernadette’s [Melissa Rauch] company.”

The nice paycheck that comes with the job will create friction with her fiance Leonard.

“She’s going to start making some money, which will unbalance their relationship as the power shifts,” Lorre said of the storyline. “She’s going to find some confidence and self-esteem, which acting does not provide in great heaping doses.”

Among the previous spoilers regarding Penny is that she may get a new haircut, and her mother may be introduced for the first time as she and Leonard get married.

The Big Bang Theory is set to return with the season 8 premiere on Monday, September 22.

It will shift back to Thursdays beginning on October 30.